A picture is worth...well, your camera

So I saw this story in the paper this morning, The Odyssey: Camera survives ocean trip to Florida.  A teaser:

Paul Shultz was walking along the pier of a Key West marina when he saw what looked like a rotting tomato pounding against the rocks.

The Coast Guard investigator waded ankle-deep into the water to fish out the ocean rubbish: a bright red Nikon camera, small enough to fit in the palm of his hand. Its waterproof plastic case was covered with six months' worth of crusty sea growth, but the camera itself was almost pristine when he found it May 16.

However, clues to tracking down its owner were few. So Shultz decided to test his investigative skills.

Mr. Shultz used some of the pictures, with the online community's help, to deduce that the camera was likely lost in Aruba, 1,100 miles away. But he still didn't know who owned it. But once he had the location, and he posted some pictures from the camera online, the owner was tracked down. Kind of an interesting, message in a bottle story with some investigative reporting thrown in.

I recently bought a new camera, because the old one was producing pictures like this: 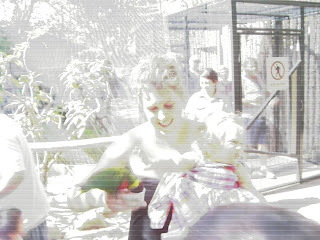 Every few photos would be grainy and whited out. At least with digital cameras, you know this right away and usually have a chance to get the shot again, but not always. With the trip to Lake Powell approaching and other summer fun to document, I decided to replace it.

As always, I wasn't looking to spend too much money, and I am not that great of a photographer that I need lots of bells and whistles. Just something to point and shoot really. The main thing I was looking for was a compact size, something I could easily slip in a pocket. I am not great about setting out to take pictures, but my last camera was so small I could have it on hand when a good shot presented itself.

The other main feature I was looking for was ease of use. When I picked up the Samsung TL105

, the menus and buttons were intuitive enough that I could navigate easily right away. Just with the passage of time, the camera is nicer than the one it is replacing. It takes 12 megapixel pictures instead of 6, and the new one shoots HD video as well. At $119, it seemed like a good deal.

After a week in Lake Powell and carrying it along on the marathon, I have to say I am pretty happy with it. I honestly have been using the 8 megapixel setting just to keep the file sizes down, but the pictures have turned out great.

This morning's story about a lost camera reminded me of a story I saw a few weeks back. This guy has a pretty clever way to identify his camera in case it ever gets lost. I may have to do it myself since one disadvantage of being able to stash your camera in a pocket or other small space, is that it tends to get easily misplaced. Or dropped it in the ocean.
Posted by Sean at Tuesday, June 15, 2010

That Andrew guy cracked me UP!