Well, there was 4+ inches of snow on the ground this morning. Like I mentioned before, I had an 18 mile run scheduled today. I was meeting a friend in the morning to talk about replacing the railing on his deck. I figured if the Burke-Gilman trail was covered in snow at noon, I'd need to postpone. It turns out that the snow was concentrated at our house and the trail was "fortunately" clear.

It was raining and in the 30's when I started running at noon, but the rain only lasted for a couple of miles and the sun peaked through on and off. I ran by this bench: 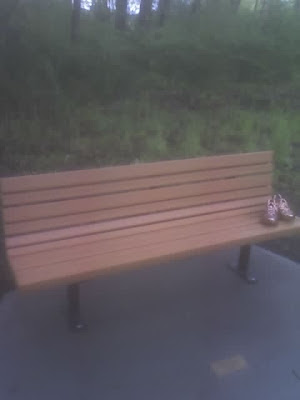 There are some bronzed shoes attached. 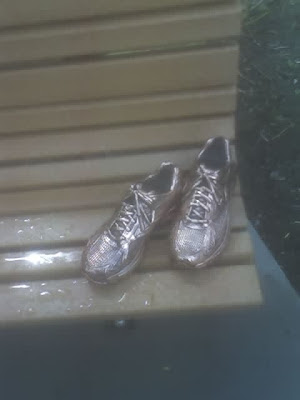 There's no plaque or anything, so I don't think they are to commemorate anyone in particular. Just art I guess. Kinda cool.

I was also simulating my drinking and fueling schedule for my next marathon. Since I can't carry enough fluids for this long of a run, I did an out and back of 10 miles, and stopped at my truck to refill before doing the other 8.

About a half mile after refilling, I ran by a group of people cleaning up the Burke-Gilman trail for Earth Day. As I was passing through, one of the guys called out my name. It turned out to be my cousin who was there with his Albertsons co-workers (including my second cousin). We were both pretty surprised to see each other so randomly.

Things went pretty well overall. The last couple miles were tough as always. I was about a half mile from the finish when a loud thunderclap boomed behind me. I made it to the finish, and as I was walking back to my truck, I looked out over Lake Washington and could see the storm coming (quickly). As I climbed into the drivers seat, the sky opened up and the hail came crashing down. Nice timing.

As I was driving out of the parking lot, I spied my cousins again loaded down with garbage sacks and even a dining room chair. Awesome job guys. Glad they didn't get too soaked while doing their good deed.
Posted by Sean at Saturday, April 19, 2008

Love the bronze shoes. I think it may be to commemorate someone, even though there's no plaque. An unspoken perhaps. Or maybe "just art." Cool enough.

You should've been a postal worker..."rain or shine"...way to go!!! And surprise meetings on the way to reward you!