I had the opportunity to see Joe Kurmaskie at the Bike Expo back in February. He is also known as the Metal Cowboy and has written for Outside, Bicycling, Men's Journal magazines and has also written a number of books. He was a very entertaining speaker and I was looking forward to reading his books. I read both Metal Cowboy: Tales from the Road Less Pedaled and Momentum is your Friend and enjoyed them both.

"Tales" is a compilation of stories of his biking adventures of his youth including a trip down the east coast of the U.S. and a trip across Australia. "Momentum" is about a 4,000 mile bike trip across the United States starting in Portland (where he lives) to our nations capital. This time around though he is towing his two sons Quinn and Enzo. Quinn rides a trail-a-bike attached to Joe's bike and Enzo rides along in a trailer behind Quinn. Having his boys along adds to the weight he is pulling, but it also adds more child-like wonder and exuberance to the trip (not that he's lacking in either department).

The books are less about climbing hills (though there are plenty of those) than it is about the people and scenery he sees along the way. He meets some wonderful and entertaining folks along the open road. There are some heartfelt moments as well as very funny ones.

Anyone who has done some traveling by bike should really enjoy these books. Beyond that smaller audience, anyone who has a sense of wanderlust and would love to see our beautiful country would enjoy them as well. Bill Bryson fans should sign up too.

You can find his books at his website, The Metal Cowboy as well as Amazon and other booksellers. Check him out. 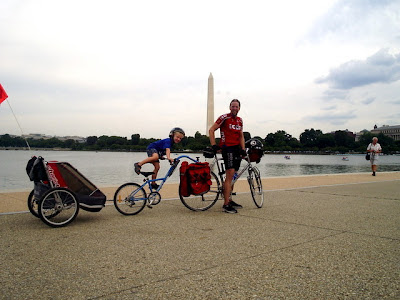