After my morning bike ride, I met up with Matt, Holly and Kristy at Wine Steals. Wine Steals is this casual wine tasting room located in Liberty Station in San Diego. Liberty Station is a former Naval training station on the north end of San Diego Bay. It was closed in 1997, and the barracks and other buildings have been redeveloped as shops and restaurants.

Wine Steals is tucked away in one corner of Liberty Station, and sits just off the Sail Ho Golf course. As we pulled up a table on the patio, the morning clouds broke up and we settled in to enjoy the sun, scenery and wine. On Sundays, Wine Steals has wine flights for $10. The wine flight is six, half-glass pours of the partial bottles left over from Saturday's wine tasting. It is a great (inexpensive) way to sample a variety of new wines. The four of us split the flight, a bottle of white, and a light lunch.

Later, we wandered through the station, primarily to pick some things up at Trader Joe's, but also to walk off some of the calories. Of course we were diverted by things both shiny and sweet. 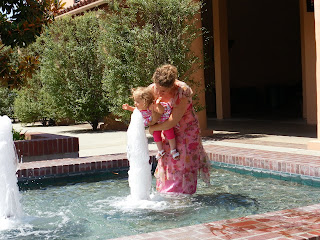 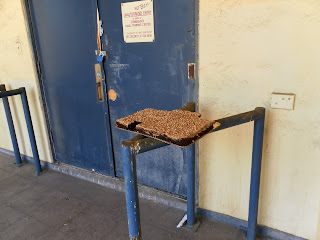 There was this random pan of brownies sitting outside one of the buildings. Without thinking, I grabbed one and took a bite. "What if they're poisoned", someone asked. Too late. I thought, 'that would be one silly obituary'. For those that didn't risk brownie poisoning, we stopped at Cold Stone Creamery for ice cream. Even with the bike ride, it was not to be a weight loss day.

Kristy had to go home, but the rest of us were still up for something. Matt and Holly said "follow me", hopped in their car and headed north. We ended up in La Jolla, a nice, semi-shwanky town along the coast. We wandered up the coastline along with the rest of the Sunday crowd. I guess there is a regular Sunday concert in the park, but we arrived a bit too late to catch it.

There is a breakwater that was built to create a sheltered beach for kids. The harbor seals found it to be a great place for their pups as well, so now kids of both species have to share the space. Matt and I walked out on the breakwater for a closer look, and then headed over to the tide pools to see what else we could find. Matt experienced it the best when he opened him self up to the surf.