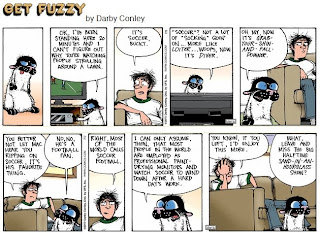 Click to enlarge
So, the World Cup final is tomorrow. Not that I have been following it. Have you? I do see it on many more tv screens than I did four years ago, but that may have more to do by my current location than increasing overall popularity.

Soccer (or football) is like most any sport - much more fun to play than to watch. My brother and I played soccer as kids, and my Dad both played and coached. Now my niece is playing on an advanced select team, and is playing the unenviable position of goalie. As kids, we sometimes went to Seattle Sounder games and even saw them make the playoffs.

But I can no longer sit down and enjoy watching a game. A big reason of course is that there is so little scoring. The long, loud shouts of "GOAL" are probably so dramatic because they are so infrequent. They have even introduced a ball that doesn't fly true in hopes that the goalies won't be able to stop it. From what I've seen, it hasn't helped much.

So, the games are pretty boring, but the real reason is the all the dives the players take, feigning injury at the slightest touch. After writhing in (mock) pain and getting a penalty called on the other team, the bounce up and usually even forget to even limp to complete the act. If they spent as much energy trying to score as they do on their acting, they wouldn't need to make a funny-flying ball.

Ah well, the rest of the world seems to love it. And I watch plenty of stuff other people find boring. I've mostly given up watching golf, but I try to catch as much of the three weeks of Tour de France coverage. Now that is some good stuff!

But again, playing is more fun than watching. I think I'll dust off the bike tomorrow and go for a ride.
Posted by Sean at Saturday, July 10, 2010