I participated in another CATS bicycle ride on Saturday. They have bumped up the starting time to 9:00 as the weather improves and the mileage climbs. Yesterday's ride was 55 miles and the route started at Marymoor Park in Redmond. There were probably 25 riders in our pace group with another 25 or so in the two faster groups. The weather was beautiful for early April, especially considering we had snow only three days earlier. There wasn't a cloud in the sky, and though it was cool to start, the temperatures eventually climbed into the upper 40's.

The route took us through wooded back roads and sprawling farmland as we headed north to Monroe. There was a nice down hill section with trees still bared of leaves and covered with mossy lichen. It would have been a spooky forest if not for the bright sunshine of the day. As we rode through the farmland of Duvall, Monroe and Snohomish we saw several horses and smelled many a cow.

On the road between Monroe and Snohomish, we rode by this place: 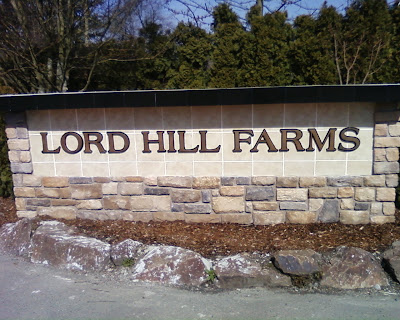 This is where my wife and I were married on another sunny day in 2001. We were forced to have the ceremony outside because of a building code issue, and we spent quite a bit of our time on weather.com hitting refresh to get the latest forecast. We ended up having perfect weather, no small gift in Seattle.

Another enjoyable ride on a new route. When I returned home afterward to inhale some lunch, I noticed my face was a little pink. I might need to start lathering up with sunscreen before I head out next time. A price I am happy to pay for such beautiful weather.

This morning I met up with the local running group again. I needed to get 10 miles in, and the group typically runs about 5 miles. I had planned on running with them and then tacking on another 5 miles near home. This morning I wasn't able to keep up with the faster runners, so I ended up in no-man's land between groups. No chatting to distract me from the difficult climbs up Olympic View Drive. I had also left behind my shuffle, so no podcasts to listen to either. So I took in more scenery than normal, and it was day filled with wooded streets, beautiful homes, and spectacular water views.

Since I ended up running alone, I decided to press on and get my running in all in one chunk. After climbing up to Perrinville I headed back down to the water front and ran out to the dog park. There were a handful of dogs romping and playing while their owners woke up with their coffee and took in the Olympic Mountains across the Sound. By that time I was pretty tapped out and I was (almost) wishing I had just headed to the dog park this morning.

It is funny that I will drag my butt out of bed on a Sunday morning to run 10 miles, but I won't do it to drink coffee and stare at the ocean. I may need to reexamine my priorities.
Posted by Sean at Sunday, April 05, 2009

Email ThisBlogThis!Share to TwitterShare to FacebookShare to Pinterest
Labels: a better me, biking, running