March 14th is National Pi Day, as officially designated by the US congress this year. That's Pi, as in ratio-of-a-circle's-circumference-to-diameter, better known as the mathematical constant beginning with 3.14159. Celebrated on 3/14, get it?

Pi is a numerical constant widely used in mathematics, science and engineering. Pi is an irrational number, meaning it can't be expressed as a fraction using whole numbers. You can carry the number Pi out to an infinite number of decimal points and the pattern never repeats. Pi is represented by the symbol below, cleverly carved into a pi(e) 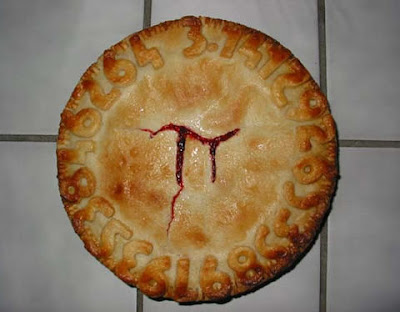 Note the digits encircling the symbol. Clever cook! In case you would like to sing a Pi Day Carol, here you go. Catchy! And you thought math couldn't be fun...