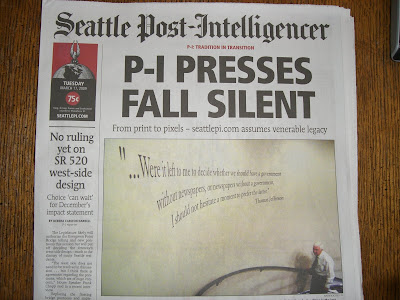 The quote etched into the curving staircase wall at the P-I is:

"...Were it left to me to decide whether we should have a government without newspapers, or newspapers without government, I should not hesitate a moment to prefer the latter." - Thomas Jefferson

Leaving the newsroom the final workday, some craned their heads upward to the globe, as its neon flickered and illuminated the newspaper's famed logo, in present tense: It's in the P-I.

Online switch marks the start of a new era.

The Hearst Corp.'s decision to end the print edition of the Seattle P-I but maintain its Web site marks the first time that a major metropolitan daily has attempted the switch from print and online to digital only.

I went out to get my 'souvenier' last copy. Very sad indeed. Did you get the copy with the commemerative section with all the history? Great read! It has the PI globe in the front all lit up.