Does our lack of sun put your health in danger?

The Northwest's dreary winters are infamous for inducing depression. But being starved for sunlight can do more than kick you into a psychic hole.

A growing body of evidence suggests it can raise your risk of cancer, increase susceptibility to heart attack, diabetes and other disorders, and at least partly account for the region's sky-high rates of multiple sclerosis.

The reason is vitamin D, an essential nutrient produced in abundance by skin exposed to the sun's rays. Long dismissed as being important mainly for strong bones, the so-called sunshine vitamin is now recognized as a key player throughout the body, including the immune system.

Vitamin D is found in several foods, particularly cold water fish. Milk is also fortified with vitamin D as well. As mentioned in the article above, our skin creates vitamin D when it is exposed to sunlight. Unfortunately here in the Northwest, we don't get adequate sunlight for half the year.

The last time I was at the doctor, I was tested for vitamin D among other things. Not surprisingly, I was deficient. I was prescribed a 50,000 IU tablet to take once a week for four weeks. The daily recommendation is 400 International Units (IU). I don't know if it was enough to jump start my system or not (haven't been back to the doctor). My daily diet and multivitamin clearly aren't doing the job.

Fortunately there is hope on the horizon... 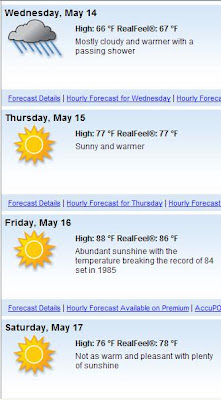 I know a place where you'd have lots of friends, that has lots more sun. HERE!

Ohhh Sean I hear you, we are just GIDDY up here at the prospect of temperatures in the 80's. And even better - Friday is Bike to Work Day!!! YEEEEAHWWWW!!!