So I woke up to this 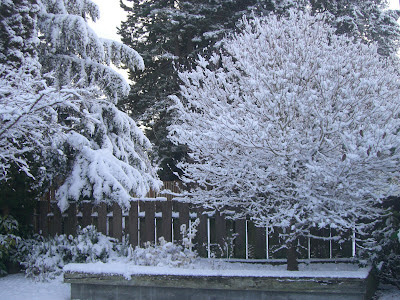 I had actually slept in a bit because I have managed to catch a bug of some sort. The snow sealed the deal that this would be a work from home day. I think it is pretty common to get sick during a taper period of training. Something about heightened defenses while you're stressing your body disappearing when you slow down. I'm not sure if that is the case here as my taper wasn't a huge dropoff.

So I ploughed through e-mails, worked on a couple loans, did some work for our relay group, some laundry, cut my hair and shaved off my beard. It is funny, shaving suddenly seemed awkward. I'm guessing most guys shave their face in a certain order unconsciously. Having not shaved in a few months, it felt like I was doing it left handed or something. Where do I start? When I left the house later, my face felt really cold. The beard apparently is a great winter coat.

I got an automated phone call that said my garbage and recycling would not be picked up today. I think they'll be by tomorrow for the garbage, but not for another two weeks for the recycling. Or maybe it was the other way around. It wasn't really clear (or I wasn't focusing). We definitely produce more recycling than garbage these days, so it'd be nice if they grab the recycling. The phone call was a nice touch for those that actually listened.

Still feeling pretty crummy tonight. Hopefully I can kick whatever this is before the weekend. The snow will be around for another day or so. The pooch seems to enjoy it. 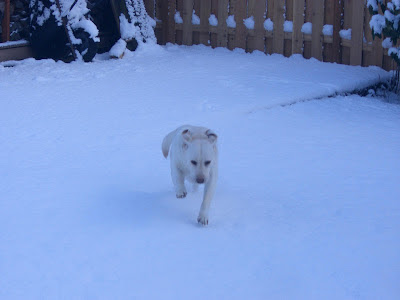 The snow is so gorgeous. Sierra looks like a baby polar bear! I really hope you feel better! You HAVE to.