I woke all too early after repeated nights of short sleep, but it did allow us to hit the road at a decent hour. Fueled up on gas, coffee, and a fast food breakfast, it was on to our next destination.

When plotting out our course, I decided to veer off of I-5 after getting out of L.A. to take the smaller highway 99 north. I remembered the stretch of I-5 between L.A. and Sacramento as being pretty desolate. Not much to look at, and not many towns to stay in overnight. Highway 99 offered multiple turn off points if we were running out of daylight or energy. I was happy to make it as far as Modesto on day one.

Much of the traffic on 99 (and probably I-5) seemed to be long haul truckers. I was constantly leapfrogging them on the flat portions of the two lane road, and struggling to keep pace on the climbs. Even though we shared the right lane for hundreds of miles, when I joined them again in the rest stops, my little truck trailer combo seemed a little out of place. 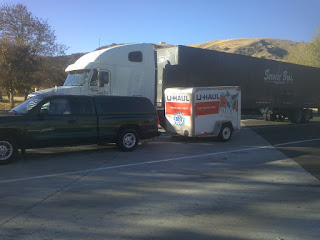 Though my truck struggled on the hills, I probably picked the perfect week to travel. Temperatures were cool enough to prevent any overheating, and snow and ice are still a few weeks off. Many years ago, my family got stuck in the passes of northern California, and memories of seventeen hours in Pollard Flat made me extra thankful for relatively smooth sailing this time around.

Highway 99 was nicely tree lined in some sections, and when we reached Sacramento (City of Trees apparently), the landscape started to change overall. The hillsides once folds of brown were now covered in rich textures of green. It also began raining off and on, so it started to feel like Washington with eight hundred miles still to go.

Once we reached Shasta Lake and the base of our last mountain pass, the trees started showing their fall colors. I tried to take pictures as I was driving, but of course most of them didn't turn out. The one semi-decent photo has the snowy peak of Shasta mountain hovering above the changing forest hills. 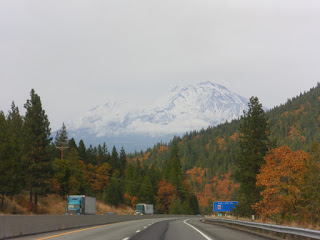 As I mentioned in the previous post, Sierra was doing much better this time around. I still tried to stop every two hours so each of us could stretch our legs. While leading her through parking lots and rest stop sections of lawn, it became apparent how much she was relying on memory to get around the house. When she would get to a painted line in the road, she assumed it was a curb (or small cliff from her reaction) and brace against moving forward. When I urged her forward, rather than test it out with an extended paw, she would leap ahead to dive in head first. Even a wet portion of pavement was enough color differentiation to make her think the bottom was falling out.

Our destination for the second night was Ashland, Oregon. Holly's cousin had offered up her spare bedroom  as a stop over on our journey. I had met her a couple of years ago at Thanksgiving, and we had become good (if distant) friends on Facebook. She ended up having the next day off from work, so offered to show me around town and give us a day away from the road.

I had heard stories about Ashland from my parents when they used to travel to the Shakespeare festival each year, but had never seen the town myself. While she tied up some work things in the morning, I headed out to a local coffee shop to get some writing in. I would have defaulted to Starbucks, but she pointed me to Noble Coffee, and it was a much better experience. We had a little time to spare, so Sierra and I went to a local park to walk around in the fall leaves. 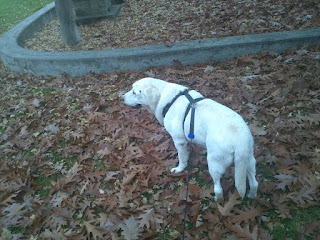 Sara and I walked around the shops of the downtown area, through another beautiful park, and eventually out to a nearby lake. The town is lovely, and everyone I ran into seemed friendly and outgoing. I can see why she likes it here so much. Really glad we stopped, but now it is on to the last leg of our trip. We are setting out (relatively) early, and should be in the Seattle area later Thursday night. San Diego still lingers in my thoughts, but I am starting to get excited about getting Life 3.0 off the ground. I know Sierra will just be glad to be off the road.