The plan was to hit the road on Monday the 12th. Since I wanted to spend as much time with my friends over that last weekend, I tried to do as much to prepare ahead of time. When I moved down in February of 2010, I only brought what would fit in my pickup truck. But since I don't travel particularly lightly, I had it stuffed to the gills. The back was packed, the front seat was full of stuff I might need to get to, and Sierra rode in the shelf that is my back seat. 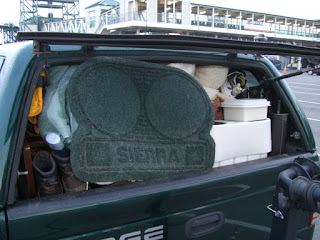 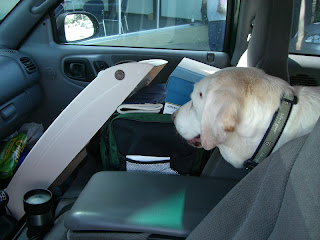 Of course over three years, I accumulated more stuff. I picked up mundane stuff like a laundry hamper, and during visits to Seattle I shipped down more tools and grabbed my golf clubs (which were ignored). I also started homebrewing beer in the past year, so that added more equipment to the mix. So, even though I did my best to thin out my possessions over the past month, it was clear that I was going to need to rent a trailer to get it all home.

I packed the truck to the gills on Friday, and would throw the rest in the trailer I picked up first thing Monday morning. I ended up unpacking and repacking the truck to get some weight off of the sagging springs, but even so I was ready to hit the road by 10:00am. Matt, Holly and Annabelle were the last to see me off, and we hugged and cried until we couldn't take it any more. With a last look at my San Diego life, Sierra and I hit the road. 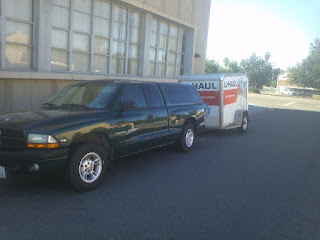 When we drove down to San Diego three years ago, I had planned to re-travel the route I had biked back in 2006. The Big Ride was one of the best times of my life, and I wanted to relive it in some small way. Sierra had other ideas. She whined and cried as we drove the twisting roads, and soon I gave up the nostalgia and headed inland to the straighter I-5. She was still miserable, but we were making better time.

She was diagnosed with diabetes shortly after our arrival, so it is possible that had amplified her problems in the truck. Still, I was not sure how she would tolerate the drive north, three years older, more fragile and now easily disoriented. Since I was going to have the extra room in the trailer, I decided to take out the passenger seat in my truck to give her more room to spread out. She would be less confined, able to see me and stand up and stretch her legs now and then. 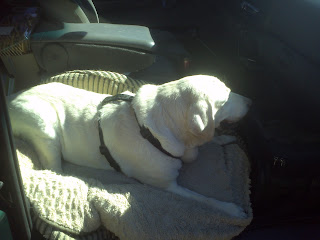 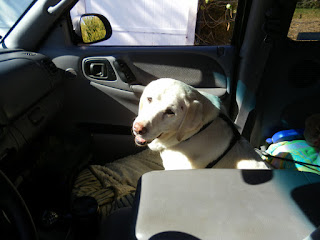 She has done great so far. I have no idea if the new seating arrangement has made any difference, but it is kind of nice having her right beside me the whole way. The other two things I was concerned with for the drive was making it through L.A. unscathed, and whether or not my truck would be able to climb the passes. On our trip down, we got stuck in a traffic jam that tested us both. Sierra would not stop whining, I had to pee something terrible, and my clutch leg was getting worked. I did not want a repeat performance, dragging a trailer, goosing the clutch to keep it in gear.

Well, we sailed right through L.A. Monday was Veterans Day, and that may have made all the difference in the traffic levels. My truck struggled to climb the hills of the Grapevine, but we made it as far as Modesto the first night. The planned hotel did not work out as there was no place to park my truck and trailer combo, but we found a Motel 6 farther down the road with tractor-trailer parking.

After sending off text messages and emails to update folks, Sierra and I tried to get some rest. Unfortunately, I am also dragging a cold with me, and we were both up way too early in the morning. More stories from the road to follow.

Email ThisBlogThis!Share to TwitterShare to FacebookShare to Pinterest
Labels: dogs, move to Seattle