It has rained cats and dogs, buckets and tubs of water since I returned to Washington. After a near record dry spell over the summer, it felt like Seattle was trying to catch up on three months worth of rain in a single week. Running two marathons was going to be hard enough without sideways rain thrown into the mix.

As race day got closer, the forecast improved incrementally, and Brett and I were treated to near perfect weather this morning - temperature in the low 40s, clouds but no rain, and a bit of sunshine breaking through at the end. There was a open flame heater at the start line, and a few runners were huddled around it, but it was perfect running weather.

Brett and I set off together, and ran side by side for the first 13 miles. We hadn't seen each other in years, so we traded stories about family, work, running and other adventures. Though we weren't burning up the clock, the miles went by relatively quickly with the easy conversation.

Since neither of us had attempted running marathons back to back, we had no real clue as to how to approach day one. I figured I would run at a comfortable pace, similar to what I would do on a long training run, and just see how the day went. I had a rough thought that running a half hour slower than my best back in January was a good plan, but it was kind of a shot in the dark. And as I found out at the marathon a few weeks ago, going slower than you are capable is no guarantee of an easier day. You aren't as short of breath, but your body hurts just as much, if not more.

The marathon was two loops of the same course, so we ran through the finish at half way. Brett and I split up after that, ready to run the pace that felt best for each of us. The route first heads south and loops around Seward Park. 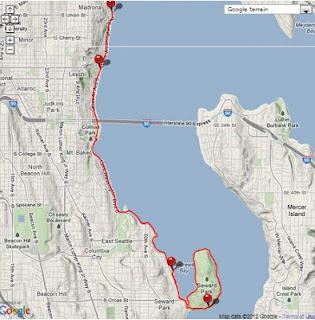 The road around the park was just off the water, but also bracketed by trees in many places. With only 300 or so runners, we had the roads mostly to ourselves as we made our way round. 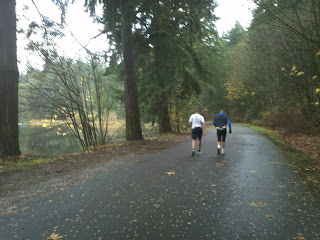 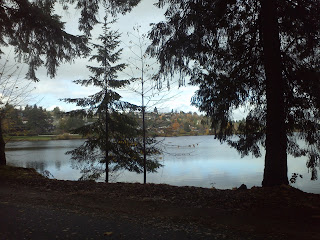 After a 3.5 mile loop around the park, the route heads north for a long out-and-back run along Lake Washington. The paths were a little more congested in this section because you had runners going in either direction, but it was still far from crowded. Not overly worried about my finish time, I stopped and took a few more photos of the lake and fall colors. 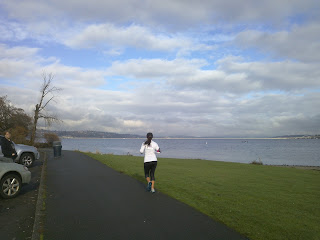 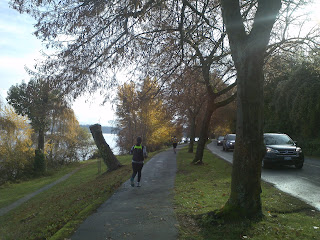 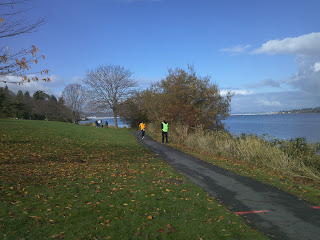 With the long out-and-back run being run twice, it was easy to recognize faces as they passed by multiple times. Also, with relatively few people running the marathon, there was a certain extra camaraderie, and words of encouragement passed freely back and forth. As usual, things got a little quieter near the end as the fatigue and soreness mounted, but there were still smiles and nods.

All the muscles in my legs grew tighter, and certain pains would not be ignored, but I was able to hold off a crash at the end. I crossed the finish line in 4:15:17, almost exactly a half hour slower than my January time. I also ran my first ever negative split, running the second half about five minutes faster than the first. Brett came in a little bit later, and I was able to get my phone out in time for one last shot. 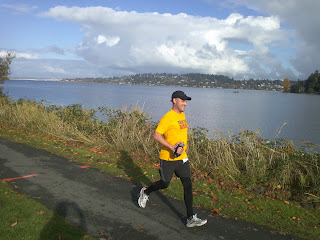 Brett and I hung out at the finish line and shared more stories over a cold beer. I also took a quick walk into the lake to get some cold water on my sore muscles. I am hoping that the natural ice bath will help reduce the swelling and help prepare my weary legs for tomorrow's challenge.

Today was a great run. Good weather, nice conversation, a scenic route and a relatively strong finish. I am sure tomorrow will be much harder, but so far so good. If I make it to the finish, I can use my finisher medal to crack open a celebration beer. 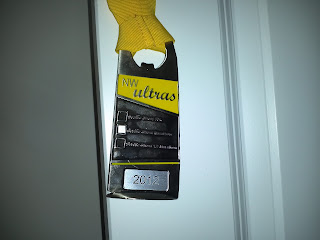