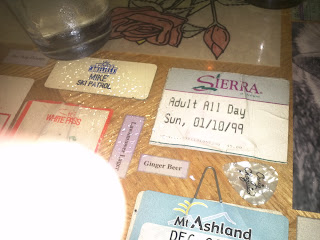 Sierra and All Day on the road.

The pooch and I set out from Ashland Thursday morning, with some 470 miles to go to the end of our journey. It would be our longest day on the road, but I was glad to have the mountain passes behind me.

It turned out that there was still plenty of climbing through southern Oregon, up and down short passes for the first hour or two. The fall-colored hillsides were beautiful, but muted, as we never quite descended out of the cloud cover. When the sun came out a couple of hours later, it felt like we had awoken a second time.

We pressed on and clicked miles and cities off the map. Sierra did surprisingly well on the trip, not whining once, but she was clearly ready for the trip to be over. 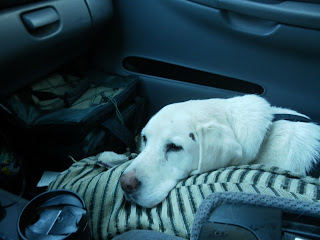 We hit Portland long before rush hour, but we hit traffic just the same. Stop and go traffic worked the weary clutch, and delayed our arrival in Washington, but crawling along did allow me to take a shot of crossing the state line. 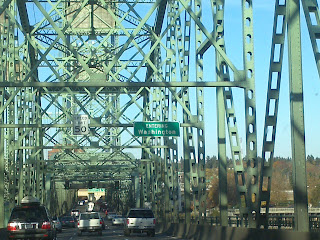 Once into Washington, we were back in familiar territory. Having participated in the STP a number of times, the section between Seattle and Portland is burned into my brain. After passing Longview, a city with its own connection in memory, I was soon checking off small towns from the route as we made our way backward to the start line. Castle Rock, Vader, Winlock, Napavine, and then to the aptly named Centralia (halfway between Seattle and Portland).

We started hitting traffic as far south as Fort Lewis, and it was slow going from then on. We stopped somewhere around Fife so Sierra could have dinner and I could grab a cup of coffee, and pulled over one last time for her shot of insulin. The sun had already set, so there wasn't much to look at, or to trip the nostalgia meter as we made our way closer to Seattle.

We pulled up in front of my parent's house just before seven in the evening. I let Sierra wander the front yard for a while before going in, so she could sniff things out and I could take a few breaths. We were here, back after almost three years away. There will be plenty of changes in the coming months, and I suppose I was pausing for one more moment before leaving one road for another.

San Diego was more than just a place I lived. It was a second home, and it will probably always feel that way. I am going to miss all the people and much of the life I left behind. But Washington has always been Home, and I felt a certain pull the whole time I was gone.

I saw this somewhere a couple of months ago. 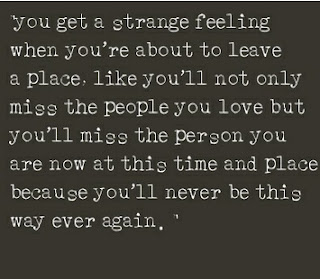 In some ways, I think I was a different person while I was gone. Nothing dramatic or unrecognizable, but an improvement on the person who arrived there. Part of the reason for the move down there was to break out of my routine and comfort zone, and now that I am back home, there is the danger of losing what I have gained. There is plenty left to work on, but I think I brought home enough of San Diego in my heart to keep moving forward.

The address has changed, but the journey continues. Thanks for continuing to follow along.
Posted by Sean at Sunday, November 18, 2012