A wonderfully lazy start to another year

Friday was my birthday, and it was the beginning of a lovely weekend.

Kristy got up extra early so we could meet for breakfast before she had to head off to work. We went to Cafe on Park, and had pancakes bigger than a dinner plate. Their menu features some odd flavor combinations - Kristy had the Captain Crunch and Blueberry, and I had the Frosted Flakes and Banana. The food, endless coffee and the company made for a great start to the day. 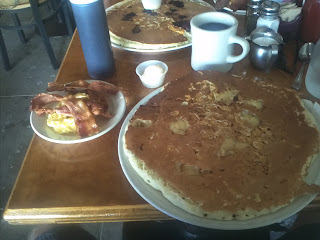 Stuffed to the gills, I went for a walk around Balboa Park. The walk helped to settle my stomach, and the sunshine and beautiful scenery kept the feelings of wonder alive. I found a little walled-off area that honors the Park founders and developers, and sat in the sun for more than an hour reading. 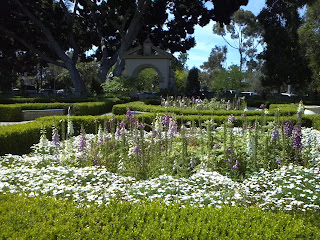 Even the trees were feeling the love. 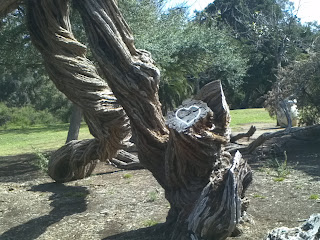 I started the day off slow, and planned to take it easy from there.  After a great lunch at Five Guys, I talked with my brother for about a half hour. It had been too long, and it was nice to catch up. Then it was to Starbucks for free cup of coffee and computer time. There was a lovely outpouring of well-wishes on Facebook throughout the day, and I wanted to respond to each one, like sending off a thank-you note for their gifts of friendship.
The lazy-time continued as I headed off to Dog Beach. Even though I didn't have my own pooch with me, it is still one of the happiest places on Earth. I walked around in the surf for a half hour, enjoying the cool waters and romping dogs. I still had time before dinner, so I stopped by a nearby restaurant and had a drink on the patio overlooking the beach while reading my book. 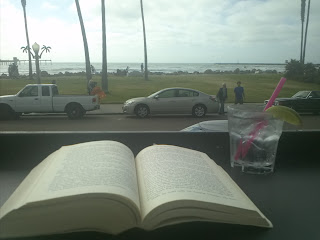 I met up with Kristy, the Lindens and the Hawkins for dinner in Hillcrest. We had a great time at a local Mexican restaurant. The food was great, and the company even better. The only thing that could be possibly be called "missing" in this beautiful day was a little post-party goodness in the quiet of the evening. As Holly puts it on her blog,

Have you ever noticed that's it's often after the party is over that the really good stuff happens? A smaller, more intimate gathering, with the better bottle of wine poured because it can actually serve everyone now. The vibe is of the truest and most relaxed kind. The conversation is more candid and has more depth. The jokes are funnier, and the laughs are bigger and last longer.

I did get to wind down the evening with a special porter that Sean had brewed just for my birthday. It is a tasty brew with a great label co-designed by Sean and Holly. 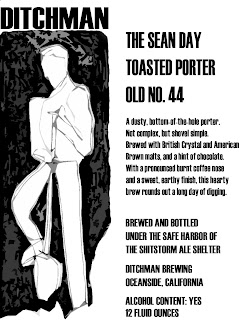 It was a wonderfully, lazy birthday, made special by dear friends. And the rest of the weekend turned out to be a lovely post-party after all. A relaxing weekend with Kristy, filled with a few firsts to start off my 45th year.
Posted by Sean at Monday, June 06, 2011