Getting the band back together

Well, the Seattle Rock n Roll Half Marathon is tomorrow. This is the third annual event, and I have run it each time. The first year I ran the full marathon, but the second half of the course is kind of an ugly slog along the viaduct, so I am sticking to the half again this year. The event is a great excuse to come up to Seattle, and another opportunity to run with my original running mates.

All this running and biking started with some sunburned knees back in 2002. Since then there have been countless miles across several states, and plenty of pictures and medals to mark the path. There have been 5k fun runs, dips into Lake Washington on New Year's Day, a 30 hour relay run, nine full marathons, and I am nineteen-odd hours from my eighth half marathon.

Over the years a team of four developed. There have been many others that have run and biked alongside us, but four of us were regularly at the start lines together. We pushed and cajoled each other to take on larger challenges, and we became Team Drunken Promise. Although we run much fewer events these days, and there is now a thousand miles between us, we still have that core of support for each other.

We will be towing the line together tomorrow morning, in what has become an annual tradition. All four of us have run the event since it started, and it will be a real treat to have the gang back together for another challenge on the roads. 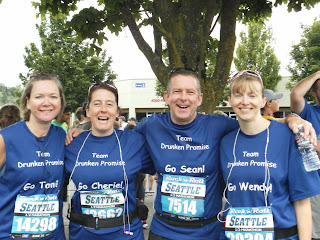