A weekend of firsts

Still full from the indulgence of the day before, I started the day by skipping breakfast. Feeling a tad bit guilty that I had gone to Dog Beach without her, the pooch and I took a slow walk around the neighborhood. She is getting slower each time we head out, and pauses at nearly every bush to sniff out its history.

After the warm-up walk, I headed to Sunset Beach for my weekend 'long' run. Because of gas prices, it was the first time I had run there in a month or two. While part of the beauty of running is that you can do it nearly anywhere, it is hard to beat the feeling of running along the ocean. There wasn't a cloud in the sky and the temperature was only a few degrees north of perfect.
At one point I slowed to watch a flock of pelicans fly by. The giant birds passed within 20 feet of me, and were impressive up close. While I was watching the birds approach, two people in front of me were staring off in the opposite direction. As the birds were gliding in from the north, two of those large twin-rotor transport helicopters were approaching from the south. They flew only a few hundred feet off the cliff side, though their size and sound made them seem much closer. I just stood and watched as these two sets of huge birds passed by in opposite directions.
I met up with Kristy after work, and it was on to some more 'firsts'. With chores and to-do lists cast aside, she suggested we do something she semi-regularly did on weekends before I came along. We went to get a pedicure. I had never had one before, and I wasn't interested in any toe painting, but the promise of the included foot massage tipped the scales. After getting our feet massaged, clipped, buffed and sanded, we went to a nearby Jamba Juice.
Along with the refreshing fruit juice, I had my first taste of wheatgrass. The grass is snipped fresh from a little garden behind the counter (like a little Chia Pet farm) and placed into a juicer that looks a little like a small meat grinder. Several handfuls of the grass are squeezed to produce an ounce shot of the green juice. And it is taken like a shot, complete with an orange slice chaser. All that was missing was the salt shaker. It did not look very appealing, but the taste was surprisingly pleasant, and I did not need to chew on the orange to mask the taste like I would for tequila.
Sunday morning we went for a long morning walk and met up with the Rock n Roll Marathon course. We met the runners at around mile 18, just before they crossed the freeway to run along Mission Bay. The runners were looking pretty worn by that point, and many were shuffling from the long miles and time in the sun. It is always inspiring to see people push beyond what they think are capable, and to press on when their mind is telling them to stop.
In the afternoon, we headed to a Sunday farmer's market up in Hillcrest. Along with a variety of fresh produce, there are several craft booths and plenty of food vendors. I had my first Scottish Egg as a late breakfast. A Scottish Egg is a hard-boiled egg, wrapped in sausage, coated with bread crumbs, which is then deep-fried. It may not sound or look appealing, but it was tasty. 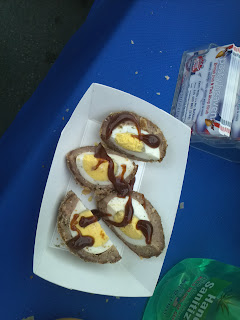 I also sampled a cucumber juice concoction which was pretty good, and had my first taste of coconut water, straight from the coconut. 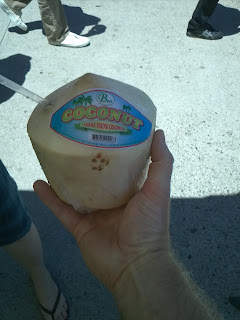 The vendors shave the skin off of young coconuts, wrap them in cellophane and throw them in a cooler. When you order one, they hammer a large nail into the coconut, put a straw into it and you are ready to drink. It was one of the few misses for me this weekend. It wasn't bad, but the taste and texture were just a little odd. Kristy says it is an acquired taste.
After indulging in the oddities and goodies of the market, we picked up some fresh produce so Kristy could make some Cowboy Caviar for our final stop of the relaxing weekend. We spent the evening with some friends at a beach on Coronado Island. The couple are camping out (well, RVing) for the week, and we spent the evening walking the beach and chatting by the fire.
It was a wonderfully relaxing weekend, the first in a long time where we got absolutely nothing done. And it was everything I thought it could be.*
*Office Space reference
Posted by Sean at Tuesday, June 07, 2011