I am heading back to Seattle for a long weekend. Of course the time will fly by, and the weekend won't feel long at all.

Not that I need much excuse to head north, but the reason for this particular weekend is to both run a half marathon, as well as attend a wedding reception. Two friends were married in Puerto Vallarta last weekend, and they are having a local Seattle reception before moving to Australia for a couple of years.

I will also try to cram in as many visits with friends while I am up there, so the half marathon is not the only thing I will be doing at a dead run. There are a few faces I am hoping to see that I haven't seen since I moved to San Diego a year and a half ago. The time seems to have flown by like it always does (unless you are standing in line at the airport), but it also seems like forever since I have seen some dear friends.

Life is good here in San Diego, but my heart will continue to be torn between the two places. I will also be back up in July to spend the week with my extended family. I am fortunate to have had a couple of free airfares (one earned, another donated) to make these trips possible. Texts, emails and phone calls have become more important these days, but they can not replace a hug in person. I hope I can continue to make these trips possible somehow.

San Diego became a second home rather quickly. It is a beautiful area, and I am surrounded by wonderful friends. And being with Kristy has made it feel even more like home lately. But there are a few things I still haven't become used to yet.

The heat is the most pronounced thing. The ocean provides some moderation, but you don't have to go too far inland before the temperatures climb dramatically. We were working in the 92 degree heat yesterday, and it was frying my still rainy blood and Irish-white skin. 90 degree temps will sound lovely to Seattlelites still trying to shake off winter, but there was no pool or umbrella drinks, only work with no shade.

On the freeways, I have still not become accustomed to the motorcycles riding between the lanes. The logic is that if traffic is stalled, they will overheat, so they must keep moving. But most riders weave in between cars when traffic is moving right along. I am surprised that there are not more accidents, but natives must have better eyes than I do.

The other thing that continues to seem odd is seeing children in bars. In Washington, you must be of drinking age to be in a lounge or bar. The law is taken literally, so even infants are not allowed across the yellow line. But kids are in most every bar here, and it still catches me off guard a bit. It isn't wrong necessarily, just odd. I am sure parents love it, unless they are trying to have one moment away.

Sean and I were at a brewery the other day, and there were a couple of kids there. This kid seemed to tie a nice bow on how completely different it is. Not only was the kid crawling around among the steel kegs and wooden barrels, but he was making chalk drawings on the concrete floor. 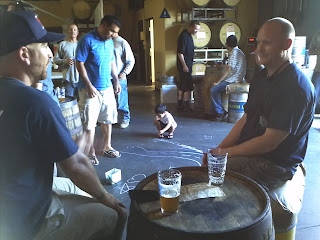 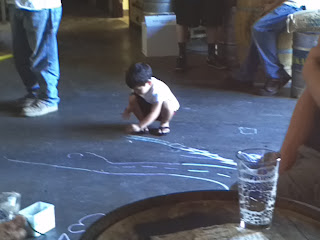 It is like he is just decorating the sidewalk out in front of his house while his parents catch up with the neighbors over a beer. Not such a bad thing I suppose.

You failed to mention that you can buy LIQUOR at the grocery store EVEN ON SUNDAY! Helloooo . . . . ! +++

California definitely wins on that count (though that may be changing soon).

To be sure, kids are still not allowed in bars in Cali. I know, because my kids have gotten me kicked out of several.