The fair isn't what it used to be

The lists of "firsts" continues to grow, as does questionable eating habits.

Kristy and I went to the Del Mar Fair this weekend. I had not been to this one, and it had been probably a decade since I had been to any fair. Growing up, my family went to the Puyallup Fair each year. It is the biggest in Washington and among the ten largest in the world. It has been around forever, and even snagged the website thefair.com. So it is officially "the" fair.

Of course as a kid, it was mostly about the rides and the animals. As I grew older, the booths with the cool gadgets and artwork were where I spent most of my time. But no matter the year, one thing was a draw each year. The scones. 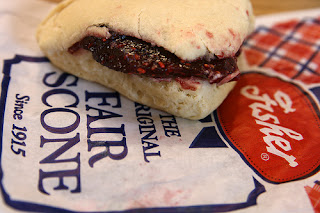 As the bag indicates, the Fisher scones have been at the fair since 1915. It has been years since I have had one, but the the buttery flakiness and raspberry jam are burned into my taste-bud memory.

Fair food has moved onto bigger (though I am not sure better) things since then. Now it is all about deep fat frying, and each year I hear about something crazier on the menu. But this is the first time I had actually experienced it.

After watching some entertaining battles on the demolition derby track... 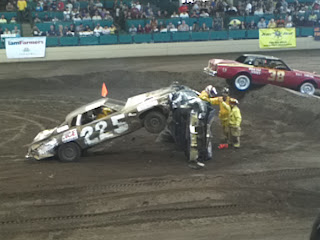 ...we got down to deep fried business. First were the deep fried pickles, and they were definitely the best of the bunch.

Then we stood in a long, slow line at Chicken Charlies. Reasoning that we didn't want to get in line again, we bought four different things as a group - deep fried Twinkies, deep fried Klondike Bars, a sandwich of fried chicken with a split jelly Krispy Kreme donut for the bun, and somehow, deep fried Kool-Aid.

It was an overwhelming gut bomb, even split among the crowd. The Twinkie was unimproved, the Kool-Aid was surprisingly good, and the Klondike and Krispy Kreme concoctions were good, but more sugar than anyone should handle on their own. Rides were out of the question with all the junk in our stomachs, and we felt pretty crummy the next day. I think I need to stick to fruits and vegetables for the next week just to bring my body back to life.

If I make it to the fair again, I will stick to only one thing from Chicken Charlies fry shack. But if I could find Fisher scones there, I might risk eating myself sick again.