Taking care of the trivial

Well, it isn't entirely trivial. It is coffee after all.

(in my best Andy Rooney voice) "Did ya ever notice that paper coffee cups are often 'dribble cups' in disguise?" Have you had this happen to you? You stop at your local coffee shop or cart to get your morning cup of joe and the first sip ends up on the front of your shirt. The lid seems to be on tight, but it leaks just the same. The problem may be obvious to some, but when I've mentioned it in the past, I often get blank stares or exclamations of "that's what it is?"

Long ago, most places replaced Styrofoam cups with paper ones due to concerns about toxins leaching into food and the release of hydrocarbons into the atmosphere. The problem with the paper cups (where dribbling is concerned) is the seam along the side. The seam is where the paper edges meet and are joined by being folded over one another. The fold is thicker than the rest of the cup, and this creates a gap between the lid and the cup. If the drink opening in the lid is near the fold in the cup, a dribble glass is created.

This seems (seams) obvious, but I have never seen a barista look at the cup before placing the lid on the cup. Whenever I pick up my coffee, I spin the lid so the seam is on the opposite side from the drink opening before taking a sip. A family member used to work for a coffee company, and I used to jokingly give her crap about getting this 'major' problem fixed. My older brother overheard this and said that it bugged him as well, making me feel a bit less crazy for noticing this issue.

As a side note, I went to Google images to see if I could get a picture of a paper cup to point to what I was talking about. One was a self-created image from blog post complaining about this seam/dribble issue, so I'm not alone. Another was this one that shows that at least the cup manufacturers know about the problem. 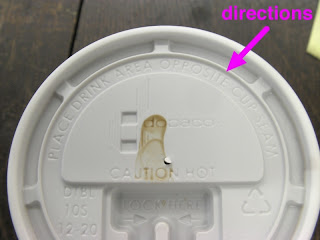 Of course this was all solved by bringing in my own travel mug, thereby eliminating spills as well as paper waste. But I had another annoying (trivial) issue. In this super-sized society, the smallest travel mug I could find was a 16 oz one. But I really only want a 12 oz coffee. So every time I ordered 12 oz coffee and handed them my 16oz mug, they would look at me as if I was trying to rip them off. I would often say "just put a Tall coffee in there" or "leave an inch of room", but I would often get charged for a Grande coffee anyway.

I know, big deal. But it was silly and annoying, and I stop at coffee shops (too) often. If they would just make a 12oz travel mug, I would buy it. For a couple of years, I looked but could not find one. Finally, there it was sitting on a shelf at my local Starbucks, bathed in sunlight with angels circling overhead. I bought it and ordered a tall coffee, hold the distrustful looks, please.

And the first sip burned the crap out of my lips. It wasn't a dribble glass, but more like when drinking from a glass filled with ice. You can't get a sip, so you tilt the glass higher and higher until the dam of ice breaks and the drink splashes down on your face. Annoying with a cold beverage, painful with a hot one.

It took me one more cup of coffee to figure out what the problem was. The drink opening was small enough that no air was getting in. You had to tip the cup higher to overcome the vacuum. If you look at any disposable coffee cup lid, there is a hole somewhere to let air in to prevent this. But for some reason, the designers of my $16 travel mug didn't think to include one. So what is a guy to do? Grab your DeWalt driver of course. 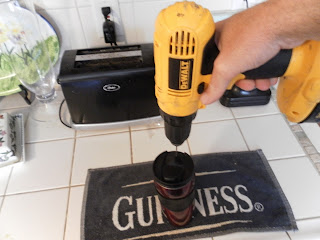 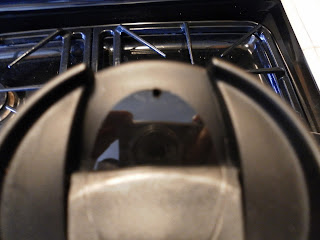 Problem solved, and all is right with the world again.
Posted by Sean at Monday, September 27, 2010

I never knew about the seam in the cup opposite the lid - probably because I'm cheap and don't buy coffee out enough.