I mentioned earlier that I wanted to get back to listening to more music instead of podcasts. On my road trip through Arizona I brought several CD's along that I had not listened to in a long time, and it was great hearing them again as the miles flew by.

Though I have two big boxes of CD's to catch up with, I would love to find some new bands to add to the mix. Back in Seattle, there is this great radio station called The Mountain. They play an eclectic mix of old classics as well as new bands that aren't yet (or never will be) played on more mainstream radio. This was about my only source of new music, and I have not found a similar station down here in San Diego.

Recently, my only discoveries have been from a running podcast I listen to. Steve puts in a single song in the middle of each episode, usually from a new artist that has offered a song up as "podsafe", meaning that podcasters can use it without dealing with copyrights or making payments. Some established artists also release a song or two as podsafe, so occasionally Michael Franti or Ingrid Michaelson will pop up.

We were recently over at a friend's house for a birthday party, and we ended up staying the night. Over breakfast the next morning, the host put on some music, a recent discovery that they love to play on weekend mornings. I enjoyed it and ended up buying the album. I listened to it for the first time during my Grand Canyon run, and it made for a great soundtrack for the morning.

And I thought, this is how I should be discovering new bands, I should be talking to my friends to find out what their latest fave is. So, thanks Jonathan and Lynne for introducing me to Sigh No More

by Mumford and Sons.

I asked my friends in Phoenix the same question, and they came up with some bands I already listen to. When they countered with asking what my latest finds were, I was initially stumped. That's my problem remember - no new music. After thinking for a bit, I guess the most recent bands I have purchased whole albums from are: Brandi Carlile

. Not new bands, but newer to me. My newest addition just came in today, courtesy again from the Phedipidations podcast. He has played a couple of songs from Great Big Sea, and I ended up getting their Up

Then the other day, Matt was cleaning out the shed and dropped this in my room. 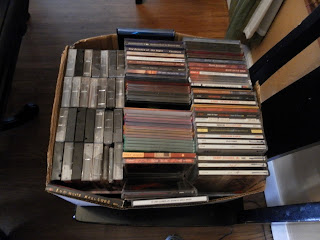 He knew I was looking for music, so he offered these up before they were sent off to the Salvation Army. No new bands, but I did find some older stuff that I didn't have.

So, what is your latest musical find? I'd love to hear about it.
Posted by Sean at Wednesday, September 08, 2010