I just finished the book Lit by Mary Karr

. It is a memoir about her struggle with family scars, marriage, motherhood, and becoming a writer all through the hazy veil of alcoholism. The book details how her dependence on alcohol pushed her away from life, and ultimately tore apart what she knew of it. Later in the book, she struggles to get sober, and through her support group, grapples with "letting go and letting God".

I have read a number of "my life sucked, let me tell you about it" memoirs over the past few years. At some point they all seem to run together, and I need to step away from this genre. I'm not sure what online snippet led me to put this book on my 'to-read' list, but it lurked there for almost a year before I sat down to read it.

I had some difficulty getting into the book initially, but about a third of the way through it grabbed on to me. She has an unflinching way of writing about how alcohol blew apart opportunities and relationships, without playing the victim and glossing over her part in the collapse. Though she is descriptive in the details of the demise of her marriage, she is clear that her descriptions are not only filtered through a haze of alcohol, but her own perceptions of what happened. She allows that the story would be quite different if told by her ex-husband. As she notes in the book, "I would’ve preferred that my ex vet this manuscript and correct the glaring flaws. Wisely, he balked – I’d have hated to see his version, too."

Many dependency recovery programs have a strong element of prayer and faith. Mary would have none of it initially, and it is interesting to read about her reasoning and struggle as she grapples with letting go of control and preconceived notions. She walks a rather crooked path before entering the doors of church, and even when she sits down in the pew, she brings something to read in case she is bored. Not a quick conversion by any means, but I found her path interesting.

As a side note, I have been marking good passages in books over the last year or so. If I own the book, and particularly if it is a work of non-fiction, I will highlight good passages or turns of phrase in pen. If it is a book on loan from a friend or a library, I have been using these little Post-It flags

. This is what Lit looked like when I was finished. 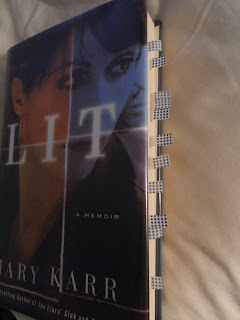 A bunch of flags is usually a good indication that I enjoyed the book, but not always. There have been a few books heavily flagged that I thought weren't the best. Although, some of them were read when I was going through the toughest part of our separation, so it makes me wonder if I was just not in the right mental place.

On the flip side, Lit may have been really enjoyable for me because I read it at the right time. The author's struggles with depression, dependency, divorce and despair may have hit me at the right time. Who knows, if we had read it in book club back when life was different, I may have written it off as just another woe-is-me memoir. But I don't think so. I think this one stands above the others, no matter when I picked it up. Worth a read.
Posted by Sean at Tuesday, September 07, 2010