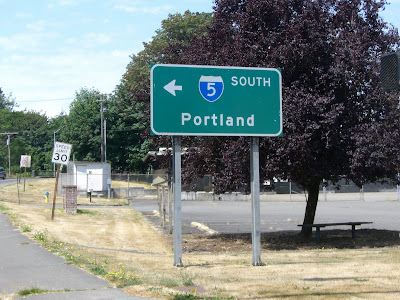 The Seattle to Portland bike ride was held this past weekend. This year was a little different all the way round, and it may be the last time our biking group rides the STP.

It was my goal to do the ride in one day this year. We have done the 205 mile bike ride in two days for a number of years, but a one-day ride was a challenge that lurked on the horizon. The Rock n Roll Marathon was only two weeks ago, so I wasn't sure if I was sufficiently recovered. I have done more training this year than any other, so even though I wasn't feeling 100%, I decided to give it a shot.

We had a few people doing the ride in two days, so then it became a logistical problem. I had intended to ride to Portland, and then join the two-day riders on Sunday and ride the second day with them. I planned on getting a hotel and then taking the train to Longview the following morning.

As the event approached, our group of riders started shrinking. Then a few days before the ride, our planned support vehicle backed out. This meant that the two-day riders had no way to get to Longview, where they would be spending the night with my Mother-in-Law, Doris. Brian, one of our riders, volunteered to drive the support vehicle this year while Cherie and Dalton rode. He also offered to drive everyone to Portland to see me cross the finish line. Not only would this be a great boost for me, but it meant I could stay with the group in Longview.

Since I was attempting a one-day ride, the day started much too early. The start time was 4:45am, which meant a 3:00am wake up call. The riders stayed with me at the house so we could be a little closer to the start line. Unfortunately, work ran long for everyone, and after packing everything up and getting to the house, we didn't get to bed until midnight. You'd think that after so many years we'd know how important a good night's sleep is the night before an event. However money is tight for everyone and none of us could take the day off.

I rolled across the start line at about 4:50am. I was hoping to maintain a 17mph average while I was moving, and 15mph overall including stops. This would put me in Portland between 6:30 and 7:00 at night. Being a numbers geek, I had a little cheat sheet prepared that showed goal times at serveral of the stops. This way I could tell if I was on pace without staring at my average speed readout for 200 miles.

The day started out pretty well. I maintained a good pace in the morning, and actually built up a bit of a cushion by the halfway point in Centralia (aptly named). I reached Centralia at about 11:15am, and Brian met me with a Subway sandwich. A real lunch was a nice change from all the simple-carb bike food being handed out. I took a longer break, and after a porta-pottie stop and a trip through the sunscreen spraying station, I was back on the road at 11:45am.

As soon as started out again, the temperature seemed to rise about 10 degrees. It would reach the upper 80's which is perfect for lounging on the beach, but a bit too warm for we Northwest riders. The winds also kicked up some, so my pace slowed.

There is one 'muscle' that can't be trained without lots of time on the bike, and that is the one that meets the saddle. I had put in more miles than normal, so I thought I had sufficient saddle time, but I was sore from the first few miles. I think my seat has gone beyond its useful life (the bike seat that it). It has over 5,000 miles on it and it would quite literally end up biting me in the ass.

I struggled physically and mentally for the next 40 miles. The heat sapped my strength, it hurt to sit in the saddle, and the three hours sleep was catching up with me. Then at mile 140 my back started to spasm. I pressed on to the next pit stop in Lexington a few miles down the road. I grabbed some food and decided what I wanted to do.

I have pressed on through pain before and lived to tell the tale. I've had knee pain at mile 6 of a marathon and pressed on to finish, but you obviously don't want to risk lingering damage. Watching my brother put to ground with back pain for weeks was definitely on my mind. I certainly couldn't afford to be out of work for any length of time.

Because the rest of the riders were planning on meeting me in Portland and then driving me back to Longview, every minute I lost on the road meant less sleep for the already sleep deprived group. I also didn't want to show up at Doris' house only to say hello and go to sleep. I was only about 20 minutes behind schedule at this point, but I imagined I would be slowing further. I decided to call it a day.

It isn't easy for me to give up, and as I rode into Longview the voices in my head started arguing. How much does it really hurt? Your energy could come back. I could call Brian and tell him I'll just find a hotel in Portland. But I stuck with my decision to quit and rode into town to get some lunch. I spent some time sitting in the sun with some coffee while I waited for the rest of the riders to finish.

Cherie and Dalton could have had a much worse day. There is a 10 mile stretch behind Fort Lewis that usually is a struggle against headwinds. This year it was relatively calm, but it was much more dangerous this time around. A driver intentionally swerved into the bikers riding on the shoulder of the road. The car knocked off the rider in front of Dalton of her bike. Dalton ended up diving off his bike to get out of the way, and Cherie felt the car mirror swipe her jersey. One of the motorcycle support crew went after him, so hopefully they were able to get a license plate.

At the end of a long day, we enjoyed a wonderful pasta dinner at Judy's in Longview with Doris. We shared the horror stories of the day and Cherie mentioned this might be her last STP. At 10,000 riders, the ride has just become too big. It is a shame because it has become a nice yearly tradition. I still would like to conquer the one-day ride, so we'll see how we feel next year.

On Sunday I drove the group back to Winlock at the 120 mile mark. Brian was able to ride with the group for 20 miles before we swapped places in Longview. Brian was kind enough to let me ride the rest of the day so I ended up finishing the ride into Portland. It was about 20 degrees cooler, and rain came and went for most of the day.

After joining us for lunch, Brian drove into Portland. He then hopped on his bike to ride the route backwards. He met us with about 10 miles to go, so we were finally able to ride together as a group. Unfortunately for him, the skies opened up and it rained all the way to the finish. We did do some sprinting together, and he said he had a great time despite the rain.

With the rain, we didn't spend any time at the finish line festival. We dropped off the bikes, headed to Red Robin, and changed into dry clothes in the bathroom. After a well deserved drink and dinner, we drove the 3+ hours home. In years past, we have stayed overnight in Portland, but again everyone looked to save money this time around.

The STP was a bit of a rough ride this year. I may be back to tackle the one-day ride next year, but it might be time to move on to a different challenge. Feelings may change by next year, especially if we have some new riders join the group. It was the first big physical challenge I conquered, and it will always have a spot in my heart. I certainly want to encourage others to take on the challenge. Who knows, it might be my turn to support the next wave of riders.

Wow! What an adventure!