I've mentioned before what a great dog we have. Very well behaved, perpetually happy even when she is feeling poopy. And she's been feeling poopy lately. Literally.

We adopted her when she was about 5 years old, so there was no need for potty training. Even though she is often alone in the house all day, she has only had two accidents in six years, and then only when she was feeling sick. She doesn't have an ironclad stomach, though. She occasionally loses her dinner, usually after she chugs a bunch of water.

The first week of June, she had a string of three days where I came home to an accident. Again, she seemed her normal happy self, but something was obviously amiss. My best guess is that she ate the wrong plant in the backyard. We had spent much of the weekend outside, and she likes to graze. After a few days she was back to normal.

Then we had a reoccurance this week. Again, I think she got into a plant when we were over at a friend's house. For a few days I was worried what I'd wake up or come home to. She of course likes to use the white carpet the most. Fortunately, this too passed.

This is what I came home to today: 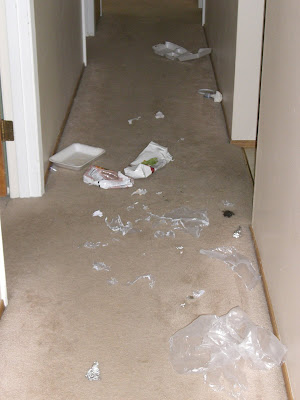 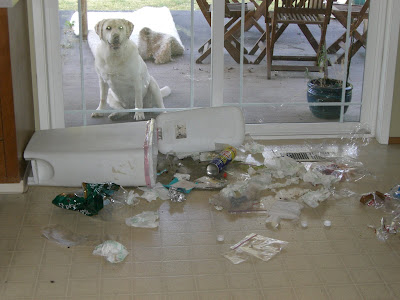 She occasionally will get into the trash, but she really outdid herself today. Not sure what was so tempting, but thankfully she didn't break open the teriyaki packet she dragged into the hallway.

As an interesting coincidence, I read this article in the Seattle Times this afternoon: Dogs' 'guilty' behavior may be owner's projection.

Many dog owners have had this experience: Arriving home, they discover their pooch looking sheepish, with its head down, ears pulled back, tail tucked between the legs, maybe slinking behind the sofa. They soon discover the reason: a favorite pair of shoes chewed to pieces, or perhaps a garbage can upended.

But is their canine companion acting guilty? Or is this an example of people projecting a human emotion onto their four-legged friend?

Seems the pooch read the article as well and decided to give me a case study. I am pretty sure she feels no guilt. I of course had some choice words when I came home to her little project. Her head and tail went down while I was venting, but as soon as I stopped she was bouncing around in anticipation of dinner. She was tossed outside instead while I cleaned up the mess.

In the picture above, it kind of looks like she is smiling as she looks over her handiwork. As soon as she was allowed back in, she was doing that chuffing pant that some dog experts interpret as a doggy 'laugh'. In some ways it is enviable to live so much in the present. Still, it would be nice if she felt a little bit of guilt on the rare occasion when she misbehaves.
Posted by Sean at Friday, July 03, 2009

Email ThisBlogThis!Share to TwitterShare to FacebookShare to Pinterest
Labels: dogs