Well, this was the big training weekend. Back to back big days that has been looming large on the calendar. I made it through without physically shattering, though mentally it was a little touch and go.

Saturday was the Flying Wheels bike ride. We have done this ride for the last few years, and it is kind of a gut-check ride to see if you are ready for the STP a month later. There are routes of 25, 45, 65 and 100 miles, so you can pick your poison. This year I decided to test myself with the 100 miler, and I passed, but just barely.

The hills start five miles in, and there isn't much let up throughout the day. I was trying to finish the course in a certain amount of time, so I was pushing myself. Early on I was feeling pretty good. Passing people wearing RAMROD jerseys (Ride Around Mount Rainier in One Day) makes you feel pretty good about your hill climbing skills. Then around mile 45, my quads started shaking and it was clear the rest of the day was going to be a struggle. Physically I was pretty much tapped out so it became a test of will. I finished within 15 minutes of my goal time, but it wasn't pretty. It felt like someone had punched me in the yarbles. 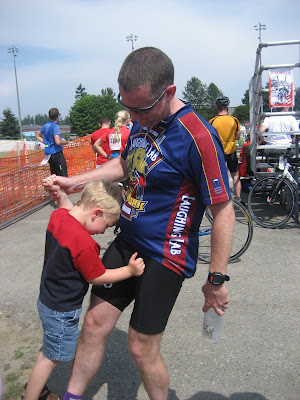 Some friends had ridden one of the other routes, and I was happy to find they had waited around for me to finish. We swapped stories over a Fat Tire, and it sounds like they had a tough, but good ride. It was Wendy's first official bike ride, and hopefully she is hooked.

Shortly after finishing, I was almost ready to swear off my one-day STP attempt. Almost. Not sure if it is best to make the decision while the pain is still fresh in your mind, or after the details fade away a bit. It is clear I am not trained as well as I thought/hoped, but a few days from now I may convince myself it wasn't that bad and I'm up to the challenge. Denial is a powerful tool.
Posted by Sean at Sunday, June 14, 2009

Hey, Sean! Sorry I missed you Saturday. I did the century, too, and by the time I got back to Marymoor everyone was gone. So what else is new?

This was my last training ride before I leave tomorrow to do the Bike Tour of Colorado next week with your other friends Brian J, Paula N, and Carol T. Does that bring back memories of Glacier? Brian sent me this clip of the weather yesterday on one of the passes we are going to do. Are we crazy, or what? http://www.livestrong.com/lance-armstrong/video/weatheronthepass-avi/546d20b7-a249-44e2-bef0-c2f298af25a5/

BTW, there is no swearing in biking. You will do the STP in one day......this I know.