The battle of the dandelion is renewed

It is an epic battle each year. When we first bought the house, the backyard looked like this: 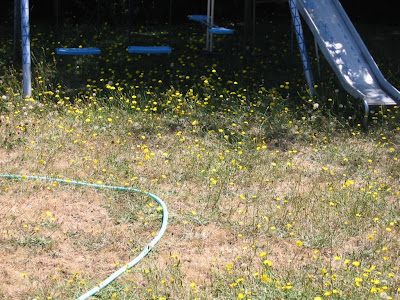 Well truth be told, when we bought the house it didn't look like this. The homeowners had mowed all the dandelions down, so it wasn't quite so obvious how bad the yard was. It was our first house and I wasn't looking down at the quality of the grass.

A few months after we moved in, we tore the yard up and put new sod down. Before we did this, I pulled as many dandelions up as I could, then put down two applications of weed killer. It reduced the number, but they still return with some force each year. It doesn't help that the dandelions mass in our neighbor's yard like so many plastic armies in Kamchatka*, ready to sweep in and take over each year.

So I've been working in the yard quite a bit the last week or two. After yanking the dandelions and a little chemical warfare against weeds and moss, it was on to the neglected planting areas in the yard. There are a couple areas that we haven't planted anything, but become wildly overgrown each year. It ends up being a grazing area for our pooch.

The area was well beyond the point of weeding or chemicals, so I had to dig up the area and filter out anything growing. It is a lot of digging, and I end up being limited by both my energy level, and by the amount of yard waste we can set out every two weeks. I finished one of the planting areas this afternoon, so the pooch will have to find another field to graze in. 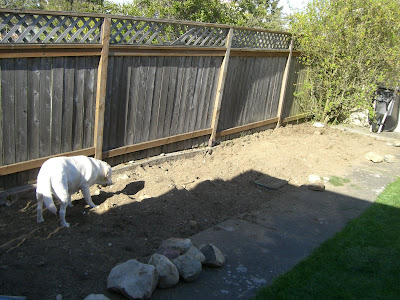 Of course there is a lesson here about neglect and procrastination. It would be much easier to tackle the weeds as they came up instead of waiting until they take over and the job becomes a week long project. This is true for so many other things, and is a subject of a future post.

when we moved to 311 Longwood, the grass was all weeds. I used to grab a cup of coffee in one hand and the squirt bottle of weed killer in the other and shuffle around the yard in my pj's every morning. When the cup of coffee was empty - I quit for the day and picked up where I left off the next day. Actually quite a relaxing morning ritual . . . aaahhh, those were the days . . . .

Brent does the same thing but with a dandilion-puller in hand instead. I try to pull a bucketful every day or two, but there are so many I've barely cleared a 5x5 section! Good luck my friend!