This is a Monkey Tree: 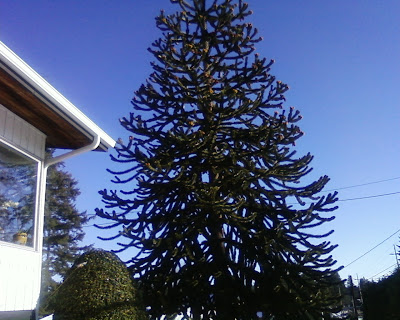 So named because the branches look like a curved monkey tail. I had never noticed or heard of these trees until I was driving somewhere with my wife. She saw one of the trees, pinched me and said "Monkey Tree!" I of course was confused.

It turns out it is a game that she and her Mom played when she was growing up. It is similar to Slug Bug where you are on the lookout for a VW bug, giving you the right to slug your opponent. My brother and I played a non-violent version called 'Zip'.

There were lots of car games growing up to keep us kids occupied so we weren't constantly asking "are we there yet?". The Dad response was "just around the next corner". I think my wife's Dad's response was "It won't be as long as it has been". This was of course long before in-car DVD players or Nintendo DS. Although we did eventually have a Mattel Electronic Football game. Oh the LED graphics...so 1977.

I can remember playing another low-tech car game a few years back with my friend Holly. We would name a band, and the other person had to come up with a band name starting with the last letter of the previous band. While our spouses slept in the backseat, the game carried us through the drive from Leavenworth to Seattle, a good two and a half hour journey.

Anyway, back to the Monkey Tree. It turn out there are lots of them in our neighborhood. I would see them pretty regularly as I was riding around in the UPS truck. There were even a couple on some of my normal running routes. Amazing what you see when you break out of a routine and start paying attention.
Posted by Sean at Tuesday, January 06, 2009

There are Monkey Trees all over Seattle! Love em! There's actually lots in OUR old Greenlake neighborhood. BAND GAME!! Awesome. Love it.