From the Faith and Values article in yesterday's Seattle Times:

Every once in a while, it would be nice to have a designated "Tie Up All the Loose Ends" (TUATLE) month, and I think January would do nicely for that purpose.

Wouldn't it be great if, back when you were born, the doctor had handed about five TUATLE certificates to your parents on your behalf? He would say, "Now hold on to these for the little one. Whatever you do, don't give them out in the teen years, unless the kid is about to flunk out of three classes and will promise to use the extra month exclusively to catch up on schoolwork."

The wise, old doc would've known that the miraculous TUATLE certificates would be needed even more in full-blown adulthood. Upon cashing one in, the rest of the world would unknowingly "freeze" in place for one month so you could do all the little and big things that are just waiting to be done — that crazy, irritating list of "shoulds" and "when I have more time to's" that nags at you like a micromanaging yet neglected boss.

There are a number of things that deserve my undivided attention right now, and I wish I had one of those"Tie Up All The Loose Ends" certificates. But of course life and the world goes on and as the article says we only have "make the most of now." I may be posting a little less frequently for a few weeks. Thank you for continuing to check in. 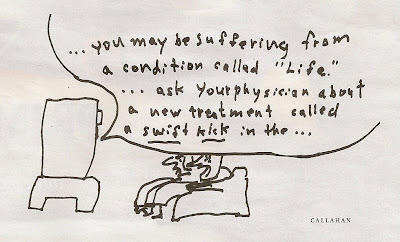 Email ThisBlogThis!Share to TwitterShare to FacebookShare to Pinterest
Labels: a better me, personal

I know you have a lot on your plate, but when you are ready for a little stress release give me a call for a run, or even a bike ride :-).