Rolling true after some repair

I have set a few fall and winter exercise goals, so my bike is finally out of the corner for good. As hard as it has been for me to get back in the habit, the bike seems to be resisting it even more fervently.

Since I haven't been doing that much riding down here, I only have a few regular routes. One of them is a nice ride around Mission Bay then up to La Jolla, and it seemed a perfect way to spend a morning off last week. Before heading out, I wanted to give the bike a once over to clean it up and make sure nothing was out of place. When I tried rolling it outside, the wheels weren't spinning freely, so I just carried it to the bike rack. I assumed it was just a brake out of place, but on closer inspection, one of the spokes on the front wheel had broken off. Apparently the strain of neglect was just too much.

Looking at a bicycle wheel, it is somewhat surprising that these thin strips of metal can not only support the weight of the bike and rider, but can stand up against additional bumps and blows of riding over uneven pavement. Off the wheel, you could bend a spoke rather easily with your hands, but on the wheel they resist bending by being placed under tension, and by relying on the surrounding spokes to share the load. A wheel is so finely tuned that if one spoke fails, the force of the nearby spokes pulls the wheel out of true. Now my wheel had a noticeable bend in it, and was rubbing with every revolution.

It turned out that the spoke was just fine, and it was the rim socket that it screws into that had broken off. I actually have some spare spokes on hand, but had never thought to buy one of the tiny little sockets. So a trip to the shop replaced the morning ride.

Apparently there are only two typical socket sizes, but I had brought along my bum wheel so I didn't have to guess. The tech took it in the back and returned with the tiny little piece that had brought my ride to a halt. When he went to ring it up, a price of $50 appeared on the register. Before I could grab my wheel and make a break for it, he explained that all of the random screws and bolts come up with that price initially. The real price - 10 cents. Well, 11 cents with tax. Finally, a cheap fix.

I went home and replaced the part. I spent some time slowly adding tension to the spoke. A couple of turns of the wrench, then spin the wheel and look for the bend. Wrench turn, wheel spin, repeat. Truing a wheel is a bit of an art form, trying to get all the forces to balance out, but fortunately I knew I only needed to work on one spoke until the wheel was straight once more.

I eventually made it out for a ride that Sunday. The weather was nice, and the scenery beautiful. This is a shot in La Jolla near my turn around point. 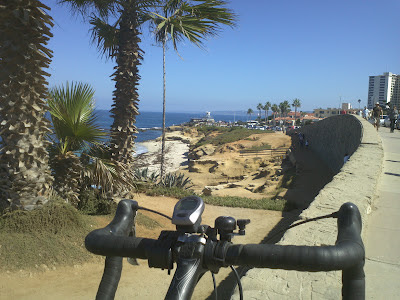 Well worth the wait.

I planned a bit longer, less scenic ride yesterday. I need to get more time on the legs, and more importantly on the seat, if I am going to get back in biking shape. When I went over to pull the bike out of the corner, the tire was flat. Same wheel. It is like my bike it trying to give me excuses not to get out.

A flat tire is a much easier fix than a busted spoke, so after a quick tube change I was off. As I was flying down a mile long hill, I was trying to keep pictures of snapping spokes and blown tires out of my mind. The ride was challenging but satisfying, and another great start to the day.

I suppose a bike is a bit like a body - it can break down from lack of use just as quickly as with hard work. I'd rather put it to good use, but it is still a balancing act between the gas and the brake, climbing and coasting. Also, something can look perfect and true, and still be under great tension. Watch out for the snap.