I am not a morning person, but once in a while, it is worth the effort. I returned to Cowles Mountain to watch the sunrise.

Kristy and I hiked Cowles a few months ago. It was the first of several hikes together. Rather than ease into our new weekend warrior habit, she wanted to jump in with both feet, choosing a five-star hike off the Mission Trails map. It turns out there aren't many hikes in the park that aren't worthy of five stars.

Cowles Mountain is the highest point in San Diego County, and the summit offers 360 degree views on a clear day. I thought it would be a beautiful place to see the sun rise or set over the city. The hike is extremely popular, and on the weekends the trail is jammed with people. At 5:00am, however, Matt and I had the parking lot and trail largely to ourselves. There were two older gentlemen getting ready as we pulled in, unpacking walking sticks and doing a bit of stretching. Their gruff, sarcastic and familiar banter made it clear that this wasn't the first time they started the day together with a  pre-dawn hike.

I passed them with a greeting and soon all that was ahead of me was the small circle of light from my headlamp dancing over uneven ground. Kristy and I had made some unintended trail short cuts in full daylight, so I tried to focus on the path, but I still managed to repeat (and add) some extra scrambles over large rocks and tight underbrush.

I paused regularly to look over the lights of the sleeping city, but still managed to arrive at the peak 45 minutes before sunrise. For a moment I wished I had those minutes back toward a full night's sleep, but the feeling didn't last long enough to register to regret. I found a comfortable rock on the east side of the peak and settled into the quiet, almost private moment. As I stared over the valley and at the hilly horizon, my mind emptied and joined the quiet.

It wasn't long before another two hikers reached the summit. They paused to touch the stone marker with the engraved sign before ambling off to the right to find their own quiet vista. Though the sun was still far from making its debut, the monotone horizon gave way to increasing definition. The single jagged line became individual peaks, and roads and trails came forth, as shades of brown and green made their way through the purple. Sounds came more frequently and insistently as the mountain awoke, soon to be joined with more and more hikers.

The earliest arrivals each touched the stone marker like it was some sort of talisman, evidence that they had made it to the top. Some hikers turned around after leaving their fingerprints, heading back down instead of waiting for the approaching solar show. I was content to wait in my rocky, front row seat.

As minutes passed closer to the break of day, the hikers changed from pilgrims to tourists. Reverence turned to chatter and laughter, and hands placed silently on stone became a whirring of cameras and self portraits. I tried to leave my camera in my pocket, and just record the moment in my mind, but the temptation to preserve the scene became too great. The beauty I saw is inadequately stored as pixels on a storage card (I need a better camera), but they are there to reinforce the memory of what I was there to see.

Even as the sun was still below the horizon, its approach was announced in the few low lying clouds, the undersides on fire and the upper peaks haloed in light. The chatter died down for a moment, and even the hovering insects seemed to stop their buzzing. One final hiker made it in just under the wire, touching the stone as the first pinprick of light flashed into our sleepy eyes.

I watched for a few more moments until enough of the sun had crossed into day that I could not look directly at it anymore. I took some more photos, hand outstretched and eyes averted. Turning away to the west, I found more hikers cresting the rise, their forms emerging from a backdrop of cloud cover we had risen above. The low rays of the sun set the bushes alight in fiery red, chasing away the remaining blues for another day.

I plan to return to Cowles again, next time at sunset. I have no doubt it will be just as spectacular to watch the sun drop out to the west as it was to see it join me in the east. 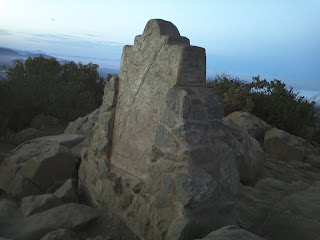 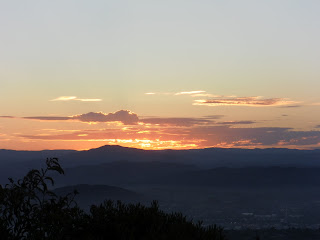 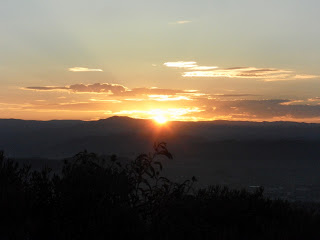 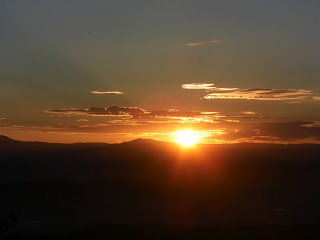 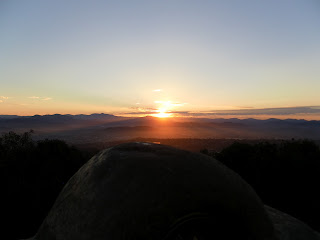 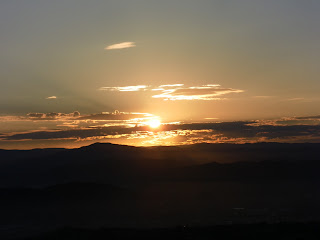 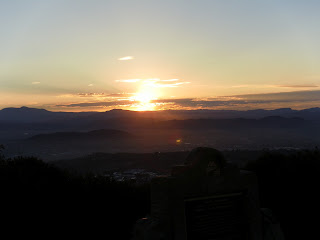 Email ThisBlogThis!Share to TwitterShare to FacebookShare to Pinterest
Labels: personal, picture of the day

Glad you took the pictures. Stunning.