Just as the Super Bowl is a marker beyond the game for me, the day before Valentine's Day was the start of a few things that have little to do with the holiday.

Cherie threw down the challenge of running a marathon after a glass or two of wine on Super Bowl Sunday. I would like to say that I woke up Monday morning (the day all resolutions begin) and went for a run. I didn't. I had to go out and get the right shoes, shorts, a training log, and all other manners of putting off the actual work. But I followed through on the "Drunken Promise" only a week later, so I won't beat myself up too badly for the delay.

Being the number cruncher that I am, things don't really count unless they are recorded somewhere or thrown on an Excel worksheet. I have been keeping a training log ever since that first run, tracking distances, paces, heart rates and calories burned. I have experimented with a few online tracking sites, and these days my Garmin just burps the data up to the cloud when I plug it into the laptop. But I have maintained a paper journal since the beginning, and I continue to make notes to compliment all the metrics. When Buckeye Outdoors crashed on me last year, I am glad I had my own hard copy.

I dug out the training journal from 2005 and found the entry for my first run. 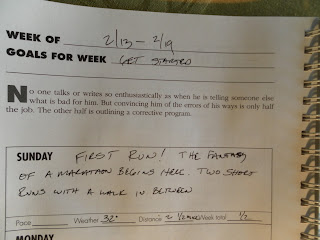 "First Run! The fantasy of a marathon begins here. Two short runs with a walk in between."
Apparently the need to record time and pace didn't begin immediately, but I did make sure to note that it was 32 degrees out when I made that first step. I couldn't run more than a quarter mile without a walk break that first time, but I was running a 3.5 mile race just a month later. Seven years hence, I am still running, and that fantasy of marathon when I couldn't run a half mile is now reality.

February 13th marks another beginning. I arrived in San Diego two years ago with a pickup truck full of stuff and a road-weary dog. I received a very special valentine the next day. 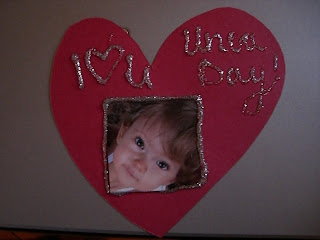 Not everything has worked out as planned, but that is to be expected. I arrived here for just that reason. Even so, there have been some nice surprises and unexpected good things because of the move. I can't pretend to know what my life would be like now if I hadn't made the leap, but I feel like I am a better person, a better man for what has happened since then.

I don't know what the future holds, but I am better for having taken these first steps, making these changes, and setting out on a new path. I need to remember that and be a little braver when taking a risk and making a leap.

Email ThisBlogThis!Share to TwitterShare to FacebookShare to Pinterest
Labels: a better me, marathons, move to San Diego, pictures, running

I am so impressed that you have tracked all these years. That is so cool to look back on.