A nice frame for a better picture

I was waiting for a time when it would all become clear, and it has, but only for a narrow part of my life. Of course, I am talking about my new glasses.

As I mentioned a couple of months ago, I have never worn glasses. I have made it forty-four years without correction, but staring at computer screens and trying to read ever-shrinking print has pushed me to the doctor. I was diagnosed with astigmatism in both eyes, and in need of correction both for reading and for distance, so I had to jump into the deep end by getting progressive lenses (essentially trifocals). I wasn't exactly looking forward to getting glasses, but was anxious to be able to read without strain.

But first I needed to pick out some frames. I was very fortunate to have both Holly and Kristy as guides here. Both have been opticians for years, and their shop Urban Optiks has hundreds of cool frames to chose from. I have a hard time enough picking out clothes, never really feeling that anything looks good on me, so picking out my first frames ever was daunting.

Fortunately, with their trained eyes they could narrow the field by looking at my facial features, the set of my eyes, and taking into account my particular lifestyle. Then I just sat back as they brought out frame after frame deciding what worked and what didn't. I would look in the mirror after each one, and as the process went on I learned more about what they were looking for, but it is clearly a well-honed talent to pick the right frame.

At first the frames came out slowly. Since they knew me and were used to my face without glasses, it was slightly more difficult, but soon we were having fun trying out different looks. We must have tried on forty frames in all, but we went with the first pair Kristy grabbed off the shelf. There were some funkier frames that worked, but since these are my first frames ever, we went more conservative. So the big unveiling... 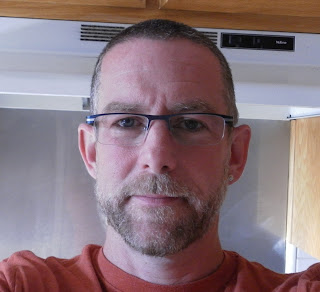 Next, how I'm adjusting. I'll try not to whine.

Very nice! They look great! Isn't it nice to be able to see?