I got a call from my roomie Matt that there was something wrong with my dog. He found her in my room howling and rolling continuously against the wall. She was completely disoriented, and had peed and pooped all over the room. She was panting heavily, couldn't stand, and didn't seem to be able to see him.

By the time I made it home from the jobsite, he had given her some agave syrup, thinking that she was going through a hypoglycemic crash from her diabetes. He had been able to get her up, but she was unstable and was walking in circles. He had put her out on the deck with her bed while he cleaned up the mess in my room.

She was still panting heavily when I arrived, and appeared disoriented and freaked out. Her head lolled to one side, and when she could stand, she leaned heavily to the right, propping herself up against the sliding glass door. She was not very responsive, and could not be calmed by voice or petting.

I carried her out to the truck, but she would not sit in the back seat, essentially throwing herself to the right and onto the floor. Matt let me borrow his minivan, and we got her in the back with her bed. While I drove her to the vet, she lay panting, braced against the back hatch. 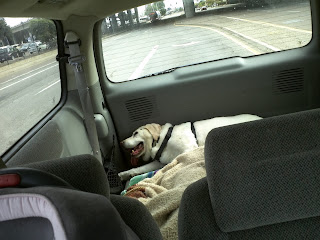 Our regular vet sent us on to the emergency hospital without even seeing her. When I arrived at our second stop and described Sierra's condition, they rolled out a gurney. I didn't want to open the hatch for fear that she would just tumble out. I climbed over the back seat and grabbed her harness while the tech opened the hatch. It took considerable effort to hold her back as she pressed hard to roll out to her right.

They took her in and gave me some paperwork to fill out. I was halfway through when Kristy walked in (Matt had called). I was properly freaked out, and as some terrible coincidence had seen a dead dog at the side of the highway as I was driving. I had mostly kept it together to that point, but once I saw Kristy, the tears came.  I don't know why that happens exactly. I guess once there is someone there who cares and can help, the fear you were keeping at bay rushes in and you can feel vulnerable for a moment. I sat in the lobby with Sierra's collar in my hand, waiting for the vet.

The initial diagnosis is Idiopathic Vestibular Disease. According to the vet and this site,


The vestibular system is what gives people, and dogs, their balance, coordination and equilibrium. When dogs develop IVD, their equilibrium becomes disrupted suddenly, dramatically and without warning. The profound symptoms of this disorder can incapacitate the dogs and are frightening for owners, as well.

The vet mentioned that rolling over is common to dogs trying to find their equilibrium, as is rapid irregular eye movements (nystagmus) as they try to track the world that is spinning around them. Unfortunately, “Idiopathic” means of unknown origin, and though the symptoms line up very well, it is generally diagnosed by eliminating other problems. Sierra has already had a chest x-ray (which came back fine) and the blood work is due in this morning.

They don't know what causes IVB, and there is little they can do to speed the recovery. The good news at this point is that if it is IVB, dogs generally recover on their own over a few weeks. There may be lingering symptoms like a head tilt. Sierra stayed overnight and is still there while we wait it out. They have her on antibiotics in case an ear infection set this off, and on anti-nausea meds for the spinning. She is on IV fluids as she was still panting heavily and would not drink. She would not eat initially, but they were able to hand feed her late last night.

She doesn't appear to be in pain, but is understandably confused and freaked out. Matt said the howling was unsettling, and I am sure was a result of Sierra being so scared. It is hard to watch helplessly as anyone suffers. I am worried about my little girl and still a little freaked out. I will let you know when I hear anything more.