I made a difference to that one

While walking along a beach, an elderly gentleman saw someone in the distance leaning down, picking something up and throwing it into the ocean.

As he got closer, he noticed that the figure was that of a young man, picking up starfish one by one and tossing each one gently back into the water.

He came closer still and called out, “Good morning! May I ask what it is that you are doing?”

The young man paused, looked up, and replied “Throwing starfish into the ocean.”

The old man smiled, and said, “I must ask, then, why are you throwing starfish into the ocean?”

To this, the young man replied, "I'm throwing these starfish back into the ocean. You see, it's low tide and they've all been washed up onto the shore. If I don't throw them back into the sea they'll die from lack of oxygen."

The young man listened politely. Then he bent down, picked up another starfish, threw it into the back into the ocean past the breaking waves and said, “It made a difference for that one.”

The first time I heard the Starfish Story (author unknown), it was on the podcast, Common Sense with Dan Carlin. Dan (a political independent) was using the Starfish Story to describe how people of different backgrounds and political leanings view "Lost Causes". Some look at a problem and feel that it is too big to solve, and that their time and effort is better spent on things that can be completely fixed. Others idealistically plunge ahead believing that if they can just change one life, than it was worth the cost and effort. The Starfish Story was a tidy metaphor.

The second time I heard it, it was more literal and less metaphor. I heard it in connection with Project Wildlife, a non-profit devoted to animal rescue and rehabilitation. Each year, Project Wildlife takes in nearly 10,000 birds and mammals representing 320 species. Wild animals that have been injured, orphaned, or come out of their habitat and into contact with humans. The animals are most often brought in by the public to one of two centers in San Diego County.

Through the spring and summer, a large influx of babies must be nurtured, raised and hand fed by volunteers. The adult animals are brought back to health and released whenever possible. Over 500 people volunteer their time, and over a hundred of those (Kristy included) are rehabilitators who provide pre-release care at their own homes.

Some animals are too injured to fend for themselves, while others have had too much human contact to have the wariness necessary for survival. These are non-releasable and are kept as education animals. They visit schools and other community events to raise public awareness.

Project Wildlife is funded by individual donations, grants and community foundations. Kristy and I attended their big fundraiser two weekends ago. People bought tickets to enjoy an afternoon of wine tastings and food donated by a chef who is also a friend of Project Wildlife. There were silent and live auctions of donated goods with all the proceeds going to support the fight. Some people skipped the auction and gave money for much needed equipment for nothing in return. And the education animals were out to say hello and thank you. 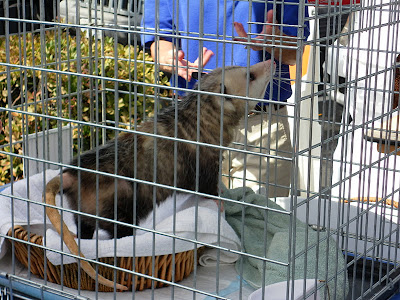 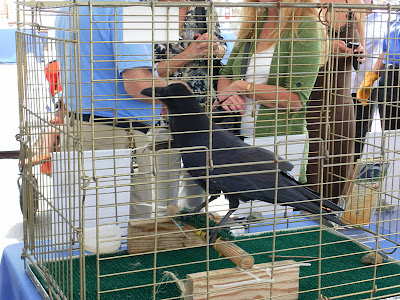 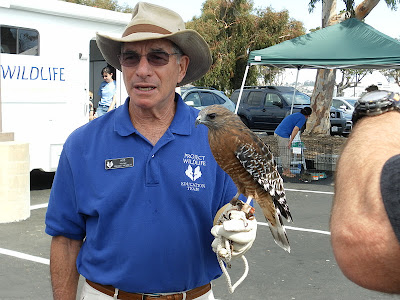 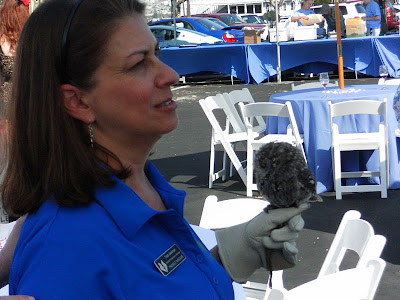 Project Wildlife is one of the largest non-profit wildlife rehabilitation organizations in the United States. They also boast a release rate that is eight percentage points higher than the national average. Hundreds of volunteers spend thousands of hours, and wonderfully supportive patrons spend thousands of dollars to enable this successful effort.

But even though they lead the country, they only succeed 60% of the time. They will never save all the animals that reach their doorstep. They kick ass to save more than half. But every time they go into the woods to release a opossum, or stand on the beach to let a bird fly free, they know, "I made a difference to that one." 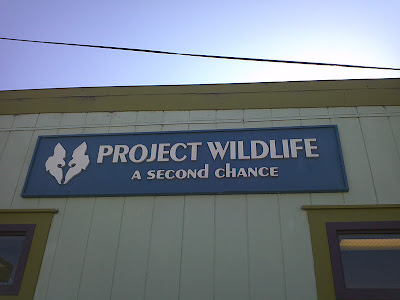 For more information, check out their website.
Posted by Sean at Sunday, October 16, 2011