I received an update yesterday morning indicating that she was making slow progress. She had eaten on her own that morning, and the jerky eye movement was a little less prevalent. She was still unable to stand on her own, but they said that if she didn't get worse that I should be able to pick her up in the evening.

They questioned what the home situation was, because she would need to be looked after. I told her that someone was going to be home during the day, so we could keep an eye on her. From everything I had heard, there is little we can do to help her other than keep her safe and let the thing run its course. As long as she was stable, an amateur was about as good as a professional. I wanted her home where she would feel more comfortable, and quite frankly I couldn't afford the continuing charges at the emergency vet.

The evening call revealed that she was still making slow progress. They had taken her outside after she had messed her cage. The doctor said she was able to walk with help, but was not walking "purposefully". I guess that means she wasn't taking the lead and was confused as to why she was out there.

I arrived at about 6:45pm and was handed a stack of paperwork detailing all that had gone on. I have only been through half of it, but there isn't much new information so far. I was given a CD with her chest X-rays, though. After some more time and questions with the tech, they wheeled Sierra out on a gurney. Though she had been able to walk earlier, she was having trouble with the slick tile floors. It was a little disheartening to see her still on a gurney, but I just wanted to take her home.

Kristy and I sat with her in the back of the van for a while to try to calm and reassure her. She still seemed to be lost and wasn't tracking us very well, but she was definitely better than the day before when she was downright panicked.

When I arrived home, I sat with her again as the vet had mentioned that the movement of the car ride would disorient her further. Matt helped me get her out of the car and get her harness on. The harness will act as a handle on her back so we can guide her along. We walked around the yard, and after about ten minutes she seemed to be ready to head inside. Exhausted, she fell asleep in the living room.

She was restless and panting through the night. I had surrounded her with dog beds and carpets in case she decided to get up, and I slept with the light on so we could both have our bearings. At 4:00am she had some water and we went outside, both of which seemed to help. She has eaten and taken care of business this morning. She still needs to be helped up and have a hand on her back to guide her along, but once outside she is walking with purpose.

We are in the wait and see mode. As long as she continues to improve, the diagnosis was likely correct. If she does not get noticeably better over the next few days, more test will need to be run to see if something worse is happening.

But it is good to have her home. 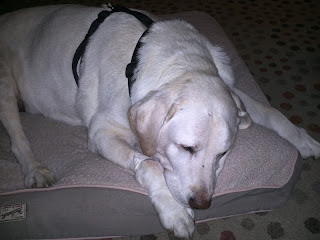 Thanks for posting an update. I'm glad she's home too. My little guy saw her picture and said, "Awww..." reciting my sentiments exactly.

Wow! What a scary situation! Glad to hear Sierra is home with her daddy. Keep us posted!

I've been praying for you both here in Idaho. Tell Sierra I have a black lab named Dixie who's praying for her as well.
-Matt's bro, john