Kristy and I stayed overnight with Sean and Marci. We had a lovely dinner with all of the night-before jitters and excitement. Like Christmas Eve, it is all part of the celebration. Unfortunately, Kristy and I had a pretty terrible night's sleep. Not that unusual for the night before, but Kristy felt like she didn't sleep at all.

Up at 4:15am and out the door by 5:00am to get to the start line in Long Beach. Arrived at 6:30am without any traffic hassles, and the ladies dropped us off near the start line before heading off to find a spot on the course. Sean and I stood in the Porta Pottie line for about 20 minutes, only to find no toilet paper. Half our business taken care of, we dashed to the start line in time for the Star Spangled Banner. We split into our separate corrals and wished each other luck.

It was a beautiful morning. I had run the course last year, but was still surprised at how scenic the course was. I wanted to stop to take photos of the water, the Queen Mary, the fire boat shooting a fountain of water, but we were here to run. As I said at the Carlsbad Marathon, there is nothing quite like palm trees at sunrise. 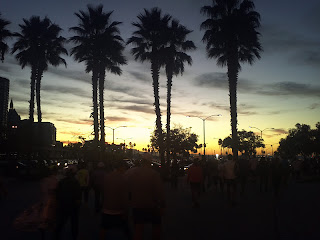 I loosely followed the 3:45 pacer through the winding streets. He was going a little faster than target pace, but it was not uncomfortable. They aim to get you to the finish line with two minutes to spare, and he had a one minute cushion in the first four miles.

At around mile 4, someone ran up next to me and said, "Hey Vegas" (I was wearing my Las Vegas Marathon shirt). It was the guy who was standing behind me in the Porta Pottie line that I had chatted with earlier. One of those crazy coincidental sightings in a crowd of 14,000 runners. Frank and I would chat off and on over the next 10 miles, and I saw him again in the crowd at the finish.

Kristy, Marci and the kids were a great support team. I saw them for the first time just before mile 7. Marci had a tambourine, the kids a cowbell, Kristy was on camera duty, and all were cheering loudly. I had just reached for my Shot Bloks, only to realize they had slipped out of my pocket somewhere. I asked Marci to grab the spare one I had in the car, and she passed it off like a baton at mile 11. They successfully navigated the closed streets to see us at three different points and still made it to the finish line before we did. I know it is hard supporting on race day, even without the 4:30am wake up call, and it makes all the difference. My running buddy Frank was a little jealous.

The course winds on or near the beach until mile 10 before heading inland. The half marathoners split off at mile 11, and the crowd thins significantly. We crossed the halfway mark a minute ahead of schedule for a 3:45 finish. The rolling hills start at around mile 14. They aren't on the map, but they are there. Much of the next ten miles is an out and back course, so you see runners headed toward the finish on the other side of the road.

At mile 17, the course heads onto the campus of California State University at Long Beach. The toughest hill of the course is on the campus, but so is the loudest crowd support. After climbing the first part of the hill, the road turns left and levels out for a stretch before turning back uphill. Even before you round the corner, you can hear the cheers. The students line the street on both sides, funneling the runners through a chute no more than ten feet wide. It is a wall of sound and energy that you can feel, and in a spot where you need it the most.

After leaving the campus, you head back on the road you came in on. The same unmentioned rolling hills are there, but somehow feel bigger on the way back out. This really broke me mentally last year, but knowing they were coming helped tremendously. For a period.

My stomach had started cramping back at mile 14, and my legs shortly thereafter. It became difficult to continue drinking, and I couldn't force myself to eat anything after mile 19. The cramping led to nausea, and the lack of food led to an energy crash. I began to lose the 3:45 pacer, but kept him in sight for a few miles. He was my rabbit to chase, but I would lose ground at each water station when I slowed to drink in what little fluids I could. I lost him completely around mile 24, and then it got ugly.

My legs were as tight as piano strings ready to snap, and it felt like the front of my stomach desperately wanted to push its way out the back. Last year I started slowing earlier, but this year I pressed harder. At mile 24 I was right on pace to finish at 3:45, but I could hold it no longer. I slowed and then walked for the first time at mile 25. A spectator focused in on me and told me to hang on, that I was almost there. I knew he meant well, but I was delirious, smoked, over the line.

When I walked by him he said, "Sean, I am giving you ten seconds to walk, and then you are going to run." I thought, "Ya buddy, not likely." Six or seven seconds later he yelled, "Sean, Run!" And somehow I did.

Well, shuffled probably. It was a death march, but I pressed as hard as I could. According to the web gizmo, 17 people passed me over the last two miles, but I passed 19. I walked once or twice over the next couple of miles, and mustered what I could for the finish. I saw the clock at the finish and tried to give it that extra .5%. It wasn't much, but it was all I had.

Last year was the worst I felt physically after a marathon finish. This year was even worse. I had felt like throwing up for miles, and wanted nothing more than to relieve the pressure. But my body would not unclench and I stumbled around weak and light headed. I later heard there was a medical tent nearby, but I walked by without seeing it. I grabbed a bottle of water and wandered into the finish area.

Sean found me just as I entered the public area, and I nearly fell against him. We made our way to the food area, and I bought a Coke. It had saved my bacon last year, a shot of sugar to a depleted system. I took a few sips but still felt on the edge of losing it. I wandered behind the food service van so I didn't throw up in the public area. I knelt on the ground, hand on the bumper, head down waiting for the wave to pass.

The gal who sold me the Coke saw me and brought over a glass of ice. The ice helped, but I stayed by the bumper for a while longer until I thought it was safe. I made it back to Sean after a few minutes, and the Coke lady took further pity on me and brought an ice cold cloth to put on my neck.

Marci and Kristy found us a few minutes later, and apparently I was still white as a sheet. I haven't seen pictures yet, but maybe I don't want to. They brought a cooler of drinks and food, and I tried to eat something with my second Coke. When I put a pretzel in my mouth, it felt like it sucked all the moisture out of my mouth. I just had to wait it out.

Which we did for a while, swapping stories of our days. The kids had some ice cream while the world stopped spinning in the wrong direction. I started to feel better, and walked around to get the blood flowing to my face again. Sean and I eventually made it to the beer garden for our free beer. The cold, carby liquid seemed to help.

I crossed the finish line in 3:47:44, a new personal best by about four and a half minutes. It was the hardest finish so far, but I feel proud of the way I pressed on through miles 14 to 24 when my body was rebelling. I had run focused, but still took the time to look around at the beautiful scenery and chat with other runners.

Kristy asked me on the drive home, "If you knew you would feel that bad at the finish, would you run the marathon again." A very good question.

I have lots of things to figure out over the next few days and months - what went wrong, what I can do to make sure it doesn't happen again. But the best answer I could give was that I had proven this time that I can push past those nagging voices that tell you to slow down or quit. I have proven that I can take it as far as my body will allow, and maybe a little farther. I don't need to prove anything, and next time I won't push it past that line again. Unless I was seconds away from a Boston Qualifier time, but that is still pretty far down the road at this point.

It was a beautiful day on a scenic course. I felt focused and in the moment. I ran strong but not with tunnel vision. I was blessed with angelic support by people I know and complete strangers. I had some of my strongest and weakest moments in the space of a few hours, and walked away with a new personal best.

Would I do it again? Yes. I plan to rewrite the ending, though.

Email ThisBlogThis!Share to TwitterShare to FacebookShare to Pinterest
Labels: a better me, marathons, running, sleep