We are almost there.

We hit the road a little earlier this morning, thanks to the early riser staying upstairs at Motel 6. He was a "heavy walker" and liked to slam doors. Since we were on I-5 and past the mountain passes, I figured we'd make pretty good time today. The pooch appeared to be feeling a little better as well, so I was looking forward to a good travel day.

Mapquest said it would be over 10 hours to make it to our final destination. This of course assumes little traffic and few stops. Since we kind of plowed through the last two days, I wasn't planning on another long day to make it to San Diego today. If the travel gods were with us, maybe - but I figured we'd stop a few hours short and enjoy a short day on Saturday.

One benefit to being on the major highways is the 70+ mph speed limits. Another is the rest stops along the way. The freeway rest stops with their open grass areas were so much better for the pooch than having her sneak out for breaks at the fast food joints. We made good time while driving, but took rest breaks every couple of hours. She seemed to be doing better when she had a chance to get out of the car to stretch her legs. When we were stopped, I let her take her time, roaming around to enjoy the scents and sun.

Oh, and there was finally sun! It had rained most of the last two and a half days, and it was really dumping when we were in the Siskiyous Mountains yesterday afternoon. It was leaning toward snow at the pass, and I had to have the wipers on high. So glad I replaced the wiper blades before hitting the road. It was raining again this morning, but sunny California finally showed its face in the afternoon. Spirits were lifted and smiles resurfaced.

Even with dragging our feet a little, we reached the LA area at a decent hour. It was tempting to press on to San Diego, but we would arrive pretty late and wiped out. I didn't want to show up, say hello, and then fall into bed. One more night at a hotel and a short day tomorrow meant we could show up more rested, ready to greet the new life in the manner it deserves.

So glad I had decided not to press on, because as soon as we hit LA we hit a wall - a wall of traffic. After flying along, taking the miles down in big chunks all day, we hit rush hour traffic and time seemed to stop. Well, I wished it had. We spent 2 1/2 hours getting from LA to Costa Mesa. The pooch had been doing a little better, but sitting in traffic for this long made her a stress-ball again. When we turned onto 405 and traffic was still moving, I thought, "the sun is still high in the sky - we could make it to the beach before going to the hotel." Not even close. We pulled in at about 7:00, both stir crazy and overdue for a pee break.

Tomorrow we may sleep in a bit. Then maybe we'll find a non-fast-food restaurant with outdoor seating for breakfast together. Hopefully with a view of the ocean. Its going to be great. 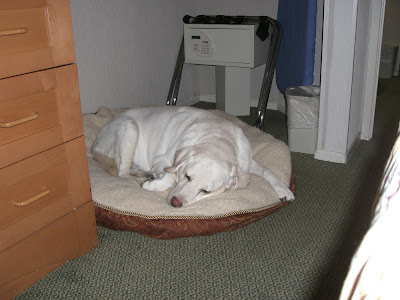