On the roads together

"How lucky I am to have something that makes saying goodbye so hard."
~ A.A. Milne (Winnie-the-Pooh)
My running and biking friends hosted a "see you soon" party last Saturday. I thought I would be leaving sometime this week, so last weekend was going to be the last chance to get together for a while. The party was put on with short notice (my fault), but it sure didn't feel that way.
The meal had a theme of my trip from Seattle to San Diego. There was Salmon from Seattle, cheese and wine from Oregon, Avocados from California, and chowder in sourdough bowls from San Francisco. There was also some Mexican tamales with the note, "you've driven too far". They also put together a photo album with some pictures of us at running and biking events, as well as photos with their families for me to take along. It was all a great surprise.
I started biking in 2002 when Cherie talked me into the Tour des Lacs ride, and then the Seattle to Portland ride the following summer. We started running in 2005 when she threw out the challenge of running a marathon. Tami and Wendy joined in on the fun a little while later, and we became Team Drunken Promise. More have joined our group over the years, taking on the challenge of exercise while spending time with friends. 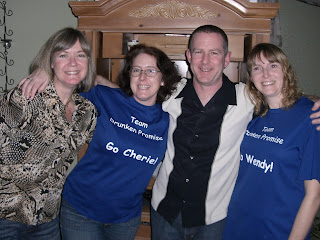 Biking and running can be solo pursuits, but like anything else, it is better with friends by your side. A couple of my California friends run but I don't think any of them bike. And since I need to find all new places to ride and run as well, I'll be looking to find some local groups. I will be traveling new roads, meeting new people, and maybe even a making a few new friends.
I don't know when, or even if, I would have started running and biking without the ecouragement/goading of my friends. It has become a big part of my life, it has taken me to great places, and I have met even more great people through events like the Big Rides. It is going to be really tough to leave any of these folks behind, even for a little while, and for reasons that go way beyond running and biking.
Like I've done with the California group in the past, we need to plan an epic run or bike ride where we can meet up and get the band back together.
Posted by Sean at Wednesday, February 03, 2010

I've got a friend who bikes. He does several rides a year and I don't think he has many people to ride with.