So, what was different this time around...

Without doing much of any training runs in the month leading up to the marathon, race day lacked a certain build up. Marathon weekend felt kind of dropped into the schedule. After arriving at the start line with only minutes to spare, there wasn't as much pre-race psyching up either. Standing in the crowd as we made our way toward the start line, I was more than a little amazed at being there. Thanks again to Sean and Marci for making this happen.

Since I was tired before I took my first step, there wasn't the typical temptation to go out too fast. I just started running, waiting for my muscles and tendons to loosen up. And oddly enough, the first 13 miles went by pretty quickly. I tried to enjoy the day as much as possible. I returned every offered high five, thanked the volunteers, and applauded the spectators. When I made the 180 degree turn at mile 17, I high-fived people all the way around the turn while trying to whoop up the crowd.

Knowing that I was going to need that extra something, I decided to run with music this time. I hadn't brought an iPod along on my other marathons. MP3 players had previously been discouraged at nearly all marathons, but most have given up fighting it. I had left mine at home in the past, preferring to take in the sights and sounds of the race. I found some headphones that allowed me to do a bit of both: 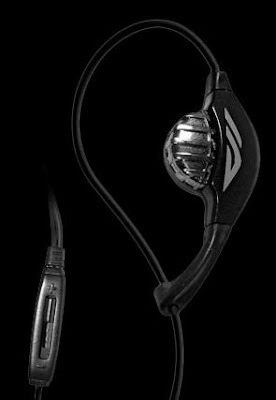 They are called AirDrives. The speaker actually sits in front of your ear rather than over it. This gives you some music in the background while still being in touch with your surroundings. One of the reasons race directors banned MP3 players were for issues of safety. They feared runners would not be able to hear directions and there would be more accidents. This set up is safer for runners on their training runs as well as races. Those roads are full of cars and other dangers.

Conventional wisdom says not to do anything new on race day, but I didn't get the headphones until a few days before the race. They were great! They were comfortable, the music was clear, and I could still hear the other runners and spectators. There is also a volume slide on the cord so I could turn down my music to listen to the bands along the way. Two thumbs up!

Now that the race is done, I compared my run in Vegas to my last one in Seattle. I love me a little post-game analysis. As I mentioned before, I finished about five minutes slower this time. In looking at my splits, I slowed down earlier but didn't crash as hard. In Seattle I really fell apart in the last two miles, and this time I actually picked up the pace in the last six miles.

In both marathons, the second half was slower than the first, which is pretty typical. The odd thing is that they were slower by almost the exact same amount, about 5 minutes and 50 seconds. I also walked much less this time around. This marathon was more slow steady decline vs. trying to stave off implosion.

I am also surprised at how well I recovered this time around. Of course I didn't have much choice since I was off and running at work the next day. Stairs weren't as painful the next day and I was able to keep up a jogging pace at work. I am still exhausted of course, but there are no sharp pains. A slow fade may be the new race strategy.

Totally looking forward to next time.
Posted by Sean at Wednesday, December 09, 2009

I could read your post-race analyses all day long. And I think that slow downhill at 19 helped keep the pace up toward the end.

Me, on the other hand, I am hurting more after this race than just about any other. (The price of speed, I guess.)

Awesome! I would love to be able to run like that!

I want to try for a little 5K here in my town next fall.

Great job, as always! Reading this makes me twitch, just a wee bit.