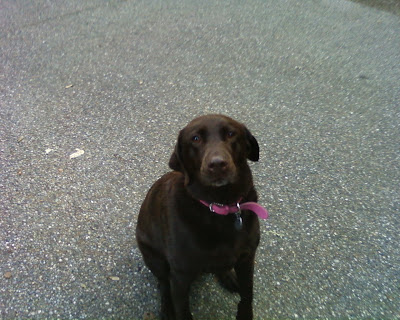 She is one of a dozen or more dogs I get to see each day. We go by Molly's house each day, and she is out in the driveway waiting for us. Most dogs flip out and start to bark when the delivery truck comes by. It must have something to do with the diesel engine and rattling cargo area. But my driver hands out Milkbone dog biscuits, so most of the pooches are happy to see us come by. He has become like the Popsicle Man to the dogs of his route. They come a running. 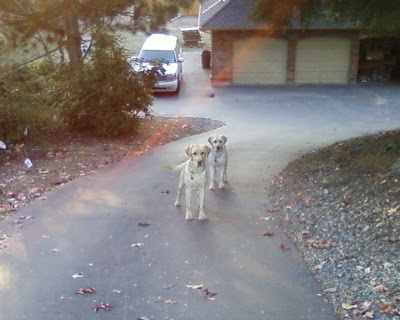 I haven't learned the name of these two yet, but they are the most well behaved of the bunch. They wait at the end of their driveway until I get in range. Not a bark between them, but one of them jumps straight up in the air like my pooch used to be able to do at meal time.

They wait patiently at this spot because they are at the Invisible Fence line. If you aren't familiar with Invisible Fence, it is a electronic perimeter installed to keep your pet in your yard. The dogs wear a collar that senses the boundary and gives an audible warning tone as the dog approaches it. If the dog continues, the collar gives a mild shock. The installers also place little white flags around the perimeter to help define the "fence" line. Whoever the local installer is, he has made a killing in these neighborhoods. There are several dogs out loose, but all those with the special collars stay in their yards.

For me it is a treat to see all these dogs each day. For someone who doesn't like/love dogs, it could be a little intimidating. There are some questionable dogs of course, and my driver has been bit a few times. At one house where he has been nipped twice, we leave the packages just outside the Invisible Fence line.

I am pretty comfortable around most any dog. There are some signs to look for and ways to behave, but of course you never really know how the dog will react to you. There is one dog on our route that my driver wasn't sure about, so I approached cautiously. The dog was more skittish than aggressive, and he backed around the house so I could get to the door.

I had one run in with a dog on my route last year that had me intimidated though. There were two dogs at the end of the cul-de-sac that were known to be aggressive. I wasn't even delivering to their house, but they came toward me barking. The driver saw the dogs approaching and banged on the side of the truck to distract them. I had one dog snap at me this year, but he was just nervous and didn't seem to be trying to bite. 99% of encounters are safe and even great, but you have to be careful.

This week has been pretty tough. Of course I had the marathon on Sunday, so I was running through serious fatigue all week. We have also been waking to temperatures in the teens, and we've been working in the mid 20's for much of the week. It has been a cold, cold week.

But seeing this will warm my heart. 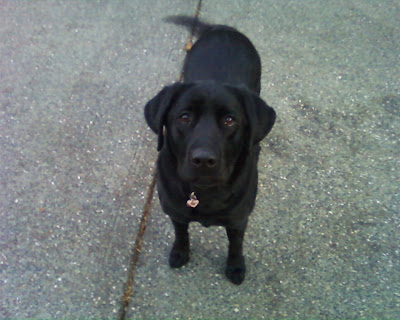