It has become a Thanksgiving week tradition to be involved in the Seattle Marathon. I ran my first half marathon at Seattle in 2005. In 2006 I handed out medals to the finishers and in 2007 Tami and I directed a little traffic out on the course. This year Tami and I decided to run.

Tami picked my up at the house around 6:15am which we thought would be plenty of time to make the 7:30 start. Traffic was great until the Mercer Street exit. It took us nearly an hour to get off the freeway and get to the parking garage, a distance of just over a mile. When we reached the start line, the race was to begin in one minute. Unfortunately we still needed a porta-pottie break before heading out. More unfortunately the bathrooms were on the other side of the street, blocked by all the eager (on time) runners.

We salmoned our way across the street and climbed over the barrier and got in the bathroom line. One benefit to being so late was that the lines were short. After our pitstop, we crossed the start line about six minutes late. Since the race is chip timed, our clock didn't start until we crossed the start line. The problem was that we were now behind most of the runners and we would be weaving through them to make any progress.
The weather was fantastic for late November. The temperature at the start was 53 degrees with a fog layer blanketing the city. Many of the runners were overdressed, so the misty air helped cool them down some. I had hopes of possibly beating my time in Bellingham, but with the slow start I was going to be happy to break two hours. 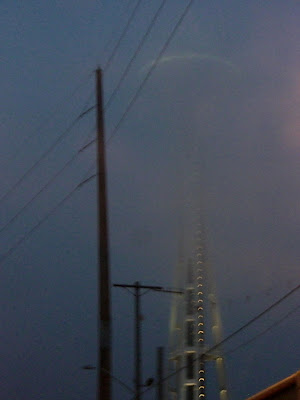 The route starts outside the Experience Music Project at the Seattle Center. From there we ran down 5th avenue lit up with Christmas lights to reach the I-90 bridge. The half marathoners then dropped down to Lake Washington Blvd which as the name implies runs right along the lake. The thick fog layer clouded most of the views, but it is still a beautiful run.

The route then turns uphill at Madison, then heads through the beautiful Arboreteum. We then wound around on an access road through another wooded area, cresting the hill around Roanoke with a view of downtown. At the top there was a stereo blasting Boston's "Don't Look Back" which I thought was appropriate. I got another shot of motivation shortly thereafter when I came upon a runner with one artificial leg with a carbon fiber running foot. It was clear he was a veteran and we all gave him variations of "you rock!" as we caught up to him.
The route then winds its way back to the Seattle Center to finish in Memorial Stadium. Running out on to the field with the finish line in sight gave me that final boost and I sprinted to the finish. I came in at 1:56:05 only 30 seconds shy of a PR, which I am totally happy with. Best of all my ankles didn't go out. We'll see how they feel at work tomorrow.
Seattle was my first major run so it will always have a little extra meaning. It is also my hometown race held during the holiday season. Today was another great event and I'm glad we decided to run this year. 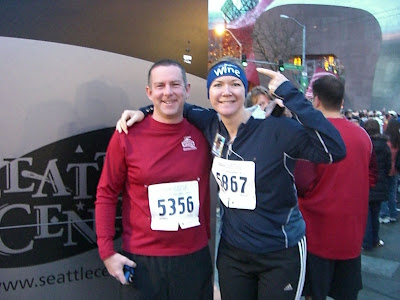 It was fun to share the day with you Sean! By the way, if anyone reading this has ever thought about running 1/2 marathon without stretching.....one word......DON'T! Your quads, calves, ankles, knees and just about every other muscle with thank you. Gotta go soak some more. Toodles!