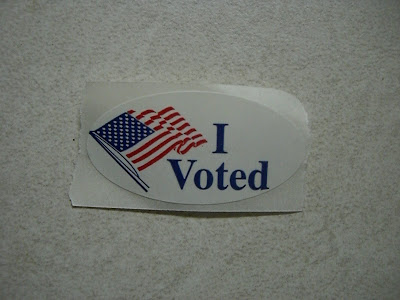 The wife and I filled out our ballots last night and I stopped by the library this morning to drop them off. A mother was carrying her young son, and the little boy had two ballots in his hand. He got to drop them in the ballot box. I thought about taking a picture, but I'm sure that isn't allowed in the polling place.

Our county, like 37 of the 39 counties in Washington, are mail-in ballots only. There were a few polling machines at the library, I assume for the folks that didn't register or change their address in time to get a mailed ballot. My parents have volunteered at polling stations the past few years, and I think they are sorry to see in person voting go away. I think the mail-in ballots are helpful in avoiding crowds and increasing turnout, but I still drop off the ballots in person each year.

I have the T.V. tuned to channel 5. They have called a number of states, and have Obama ahead 103 to 58. Since I have been watching, they have called Alabama and Georgia for McCain, both with 0% counties reporting. This is always odd to call it without any data. Several networks made the mistake four years ago by relying on exit polls which gave John Kerry a false lead in the election.

Washington's election results probably won't be known for some time. The race for governor was decided by 133 votes last time, and the same two candidates are squaring off this year. They might actually need to count the votes (at least once). There are also some important initiatives this year. We will probably be up late if we want to have any indication how things are leaning.

Channel 5 just called about eight more states for Obama and McCain a moment ago at 6:00pm, all with either 0% or 1% reporting. They are calling Arizona and Colorado to close to call, of course with no votes reported. They might as well have pre-recorded the first few hours of the broadcast.
Posted by Sean at Tuesday, November 04, 2008

Email ThisBlogThis!Share to TwitterShare to FacebookShare to Pinterest
Labels: government