Another good ride with some great friends.

I ended up riding with a group of seven, including four friends from the Big Ride (we missed you Scott). The weather ended up being great, cool in the morning but the sun came out in the afternoon. We caught the 8:45 ferry which was jammed with bicycles. 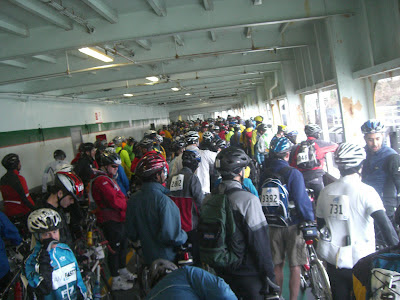 As I mentioned previously, the Chilly Hilly ride is aptly named. The route has very little flat road, so it is a kick in the keester early in the season to get you motivated to train. Or for those that actually trained over the winter, confirmation that all those spinning classes were worth it.

There were more people on the side of the road cheering us on this year, and several kids selling cookies, water and Gatorade. I even had one person hand me a cup of water as I rode by, just like in a marathon.

I spoke to the lady below: 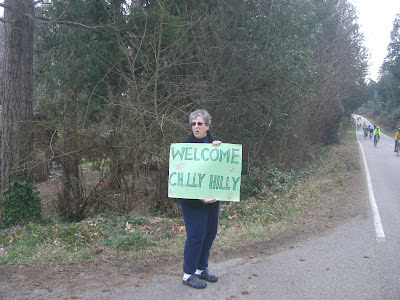 She said she wanted to let us know that not everyone on the island hates this ride. She said she actually went to to the city council to make sure they allowed us back. We do kinda take over the roads for the day. 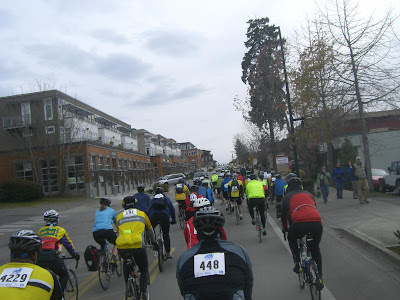 Hopefully most of the bicyclists behaved well. This early in the season, some people are a little out of practice riding in traffic. You would think that this difficult of a ride would keep the rookies away, but there were a few clueless bikers on the road. Fortunately the roads were pretty quiet. Hopefully enough bikers notice what a great area it is and come back later and pump some money into the local economy.

Another great start to the biking season.
Posted by Sean at Monday, February 25, 2008

Those are some choice pics.