I wrote a novel, and (self) published it ten years ago today.

Three years ago I re-read it while on vacation, and decided to do it with a pen in hand. I circled a few typos, noted some words that were repeated a little too close to each other, and crossed out/added some commas.  And then set that marked up copy aside.

Since it was ticking over to a nice round number of ten years this New Year's Day, I decided to fix those things.  That is one of the bonuses of self-publishing and print on demand. You can go back and tweak things, upload a new manuscript, and any new purchase will get the updated version.

The most difficult part was that I wasn't sure I still had the original "final" version saved anywhere. I had a ton of copies of the Word files that I had saved after every day of original writing, and a number of versions after the rewrites and revisions. What I didn't have was a Word file that said, "This is the final, final version you published." I had also had an unfortunate incident where I managed to overwrite both my computer and a backup drive in one day. I am still missing a big chunk of 2012 - 2015. Years of photos, and possibly a book, gone into the ether. There was definitely some swearing that day.

Anyway, through downloading a pdf from Amazon and converting it to Word, and doing an automated comparison, I managed to find a formatted Word doc that was very close to the final version.

I fixed those typos and minor word issues while resisting the urge to rewrite the whole thing. I would guess that it is pretty typical of anyone who writes, you are never completely satisfied with what you have written, so I could get in a cycle of rewriting it every time I read it. Best to leave it as it was, how I was, when it was written.

That said, along with making some changes in comma and word choice, I can remember one deleted sentence, another re-written one, and a paragraph I changed during the update that had always bothered me. The changes are small enough that they may not be noticed by someone else, but enough for me to "fix" since I was making an update anyway.

So, consider this my once a decade promotion to buy my book. You can find the paperback here as well as the Kindle version here. 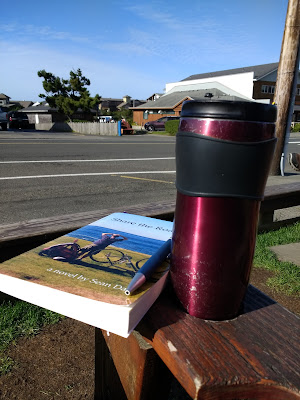 Email ThisBlogThis!Share to TwitterShare to FacebookShare to Pinterest
Labels: writing