On the road(s) again 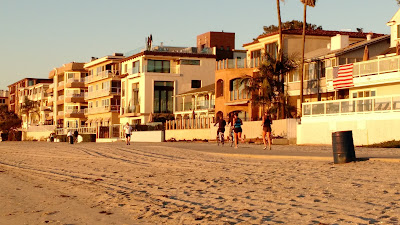 While I was down in San Diego, along with reconnecting with friends, I wanted to reconnect with running as well. I needed a kickstart, and I thought sunshine and beachfront scenery would do the trick.

My first run was a nice pairing of the connections. I went for a run with the other Sean on one of his regular loops up in Oceanside. It was great chatting with him, though it was between my slightly labored huffing and puffing. It didn't help that it was the longest run I had been on in five months, or that we had spent the previous evening catching up over (several) beers.

Once I headed south to San Diego, I retraced some of my favorite routes over the next few days. I had picked a place steps away from the Mission Bay Loop, so running would as easy as stepping out the door. The loop around the whole bay is about fifteen miles, so I opted to only do the western half. The shorter seven miles was still pushing it for my current level of fitness, but the sun, surf and other fit bodies out running kept me pressing forward.

Over the next couple of days I ran up to Sunset Cliffs and then along the Mission Beach boardwalk. Getting back to regular exercise was of course part of the motivation, but running along those familiar paths again helped bring back all that was good about my time in San Diego. I found parts of myself I had neglected or forgotten in my time living there, and I found memory triggers of those feelings three years later in random places along the path.

Back at home, there is little sun or surf to tempt me outside, but it looks like I was able to bring a bit of that San Diego magic back with me. I have managed to get out eight times in the two weeks I have been back, so the habit is starting to feel ingrained once again. The half marathon scheduled for tomorrow also helped to add a little urgency to get my butt and feet back out on the road, but there seems to be more to it than that. I am starting to care again for this body I have been given. Though I am still struggling with the food aspect (especially during the holidays), when I am running regularly I start to look at food more as fuel than as a source of comfort, so hopefully that will begin to spill over.

In another moment this week, after returning from a lunchtime run, I walked over to the local coffee shop to grab some caffeine. Before even taking a sip, on the walk back I noticed the world seemed a little sharper, the colors a little brighter. An endorphin afterglow I suppose. Whatever it was, it felt like a veil lifting for just a moment to get a peek at what was on the other side, and confirmation that I have taken some positive steps down the right road.

Email ThisBlogThis!Share to TwitterShare to FacebookShare to Pinterest
Labels: a better me, friends, running