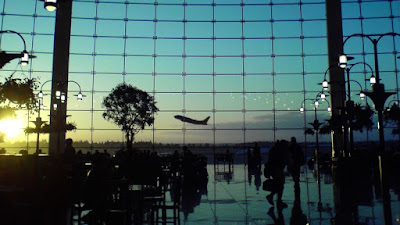 Everyone needs a little time away.

A backlog of comp time expiring soon and a surprise bonus check at work meant I could head out of town for a while. I have been meaning to get down to San Diego for a visit since I moved back, yet somehow three years have slipped away.

I had vacation brain and short-timers disease this past week in anticipation. My body and brain have been cloudy lately, and I was really looking forward to having the warmth of sunshine and rekindled friendship burn away the mist. There always seems to be a thousand little things to take care of before leaving town, so that preoccupied my brain as well.

It didn't used to be this way. Vacation did not start until I locked the front door behind me, and thinking about it didn't start much earlier. It was like if I thought too much about it, it might vanish. I still don't pack until the night before, but I am a bit better at attending to those thousand little steps.

Still, when I got to the airport, it finally felt real. My vacations the last few years have been within an hour or two's drive, and the airport somehow feels like so much more possibility.. After passing through security (without needing to take off my coat or shoes thank you very much), I walked into the crowd of travelers with the wall of glass to the runways as a backdrop - and it got a little tingly.

I guess it has been while.

Unfortunately the reality of travel set in. There was a guy in San Diego barricaded in an apartment with a rifle taking shots at the police. The apartment was relatively close to the airport, and also in the flight path of arriving planes. The airport was shut down.

Initially our flight was delayed two hours. Then it was cancelled. Then I was re-booked on a flight seven hours later. Then that flight was cancelled. A long line later and I was re-re-booked on a flight the following morning. Rather than trying to find a way home and then back again early in the morning, I found a relatively cheap hotel near the airport. My luggage of course was still on the original plane, and being the out of practice traveler than I am, I hadn't stashed a change of clothes or toothbrush in my backpack. I did have two books, a magazine and a newspaper though, so, priorities.

The plan of the day was to get to town, stick my feet in the ocean, head north and meet some great friends for dinner. Instead, I walked along the highway to Denny's for dinner in forty degree weather, thankful that I wasn't wearing shorts like I usually do in anticipation of warmer destination weather (I got diverted to Denver on the way home from a cruise one year. Shorts, Hawaiian shirt, hat made of palm leaves - you get the picture).

Tomorrow we try again. Maybe the additional anticipation will make the airport even more tingly, the ocean more refreshing, and the meeting with friends that much more awesome..

Email ThisBlogThis!Share to TwitterShare to FacebookShare to Pinterest
Labels: friends