As you can tell from the titles of recent posts (running on empty, relapse, sick), we have been rolling through a bit of a trough lately. Running is usually the antidote, but after getting re-energized at the 5k on April 1st and wanting to get back to running, I was sick for two and half weeks, and didn't run a step. At the same time, what I have been eating has been from the wrong side of the food pyramid, or plate section, or whatever (out of) shape it is right now. Though I haven't been running, it seemed I woke up sore more often, so even after finally kicking the cold, I was left feeling blah, overweight and out of shape.

Now that I was finally healthy, I had no excuse to prevent me from lacing up my shoes, other than inertia. I don't have a race on the horizon, but I plan to run three times a week as if I did. Part of starting over was checking how far I had fallen. The scale smiled sarcastically from the corner of the room.

I hadn't weighed myself in weeks and was dreading what the scale would reveal. How I feel and move from day to day is a better barometer, so I try not to obsess over weight, but the plotting, tracking, and Excel side of my brain needs some hard data. I plugged in my gender and height and stepped on. This is going to be ugly.

If I had been drinking, I would have done a spit-take. The number that popped up was equal to the lowest number I have seen in a decade. Before I could finish my "Holy Crap!", my brain thought "Wait for it..."

After alighting on the weight number, the scale counts down from five before showing you the estimate of your body fat percentage. Not sure why the countdown is there, maybe to give me an opportunity to brace myself. The surprising weight number was offset by an increase in the fat percentage number. In the past month, I had been trading muscle for fat. One number told me I hadn't fallen behind, and the other told me I still had work to do. I went for the first run in three weeks.

It was a bit of a struggle, getting my body moving again. The corners of my lungs still felt a little gunked up, and my muscles creaky from lack of use. I planned to take it easy, and my body made sure I kept my promise. I ran three times this week, all on the same three mile loop. Though it was no easier to get out the door, I felt a little better after each run.

I was looking at the stats on the Garmin site and for some reason zoomed in on the map of my route. I had never noticed the street name near the finish, but it seemed appropriate. 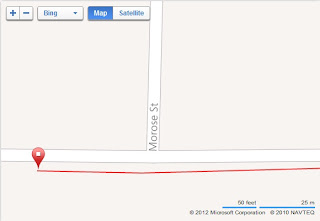 Email ThisBlogThis!Share to TwitterShare to FacebookShare to Pinterest
Labels: a better me, health, running, weight

That's funny. Why does it take years to build the muscle and weeks (or days) to lose it?