There is a photo that has gone viral and spread around the internet, or a "meme" for those more savvy than I. It is called "Ridiculously Photogenic Guy". It is photo a smiling man named Zeddie Little running in the 2012 Cooper River Bridge Run, a 10k in South Carolina. Not that he needs to be pointed out, but he is the guy in the purple. 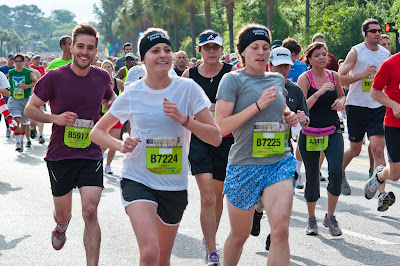 It is a little weird what takes off on the internet, but I will admit it is a surprisingly good picture for someone running a race. After the finish of a big event, it is always tempting to look at the photos to relive the experience, but most race photos are not very flattering. Most of us are not pretty when we run.

Assuming you are putting in more than a minimal effort, your face is usually strained and sweaty, and though you are exercising, you seemed to have gained ten pounds since the gun went off. This, and the fact that race photos are ridiculously expensive means that they rarely get purchased anymore.

There are the occasional decent shots when you see the photographer and remember to smile, like this one from Eugene in 2008. 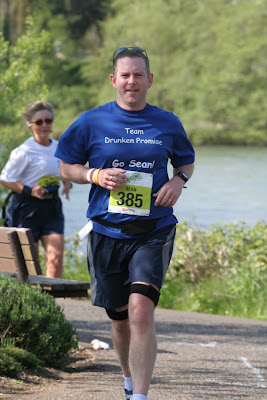 Some aren't pretty, but at least show that you are pushing hard toward the finish line, like this one from the Carlsbad 5000 last month. 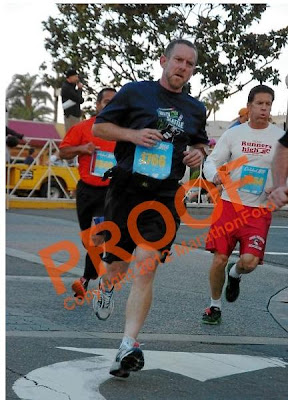 But most of the time you are in your own world, slack-jawed, fighting inner demons and monologues like this one from Long Beach last year 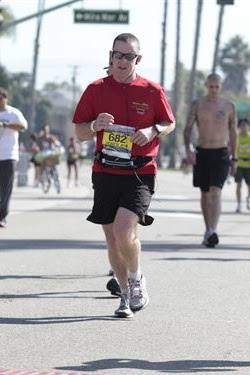 According to the story, Mr. Photogenic guy had just seen and waved to a friend, so he had a genuine smile on his face. I have written previously about how friendly faces at the side of the road can give you a boost, even at mile 26, so I am not surprised that this is why he is practically beaming. The better photos I have from races are when I have just seen friends in the midst of the battle.

Like these from the Carlsbad Marathon a couple of months ago 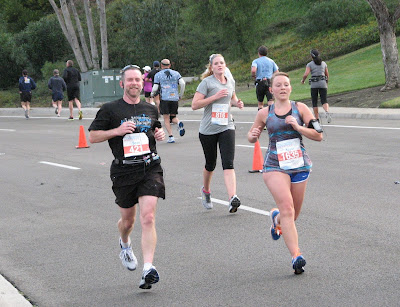 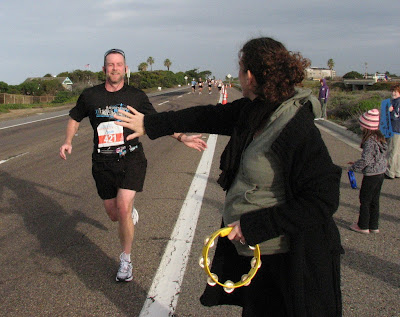 Or this oldy, but goody from the 2006 Marine Corps Marathon 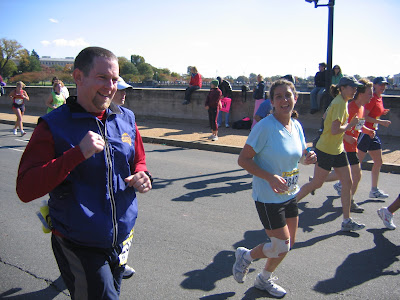 But one of my favorite photos from a run is one from San Diego back in 2007. It was a great event - I was running with six friends, it was only my second marathon finish, and I was running on the day of my 40th birthday. We saw friends at mile 4 and mile 8, but then I wasn't expecting to see anyone until the finish.

Matt and Holly surprised a few of us by cheering us on at mile 21. This is usually the point where the Wall appears, so a friendly face is a God send. Add in the surprise factor, and I was soon smiling when I wanted to be weeping.

Though it is a decent shot of me, what really makes it is the gal just ahead of me. I don't know what prompted her reaction (maybe Holly was dancing a jig or something), but she is not only smiling at mile 21, but letting loose a huge laugh. It makes me smile every time I see it. 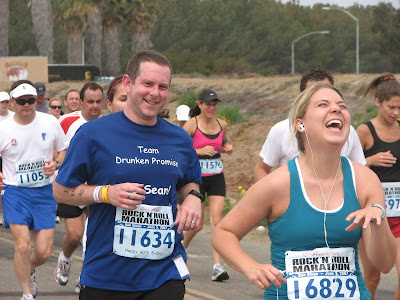 Maybe this one will make it around the world as "Ridiculously Happy Marathon Runner".

I agree Ridiculously Happy Marathon Runner. Really? You were running!?! Come on...

I have always loved that photo! How about "Deliriously Happy Marathon Runner" being that you were at mile 21?