I don't always drink beer, but when I do, I'm usually standing on a concrete floor


"Without question, the greatest invention in the history of mankind is beer. Oh, I grant you that the wheel was also a fine invention, but the wheel does not go nearly as well with pizza."


San Diego has a large, and growing number of craft breweries. Some have made it big, like Stone Brewery that now sells its beers across the nation, and has grounds worthy of a state park. However, most are probably not known much outside the area, and are typically housed in an industrial warehouse looking something like this 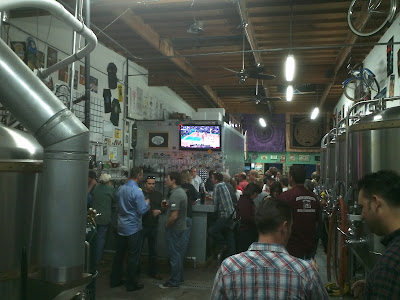 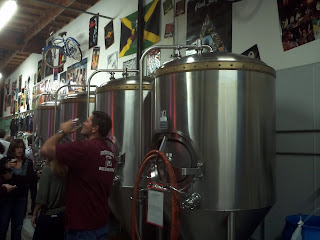 With big fermenting pots on one side of the room. 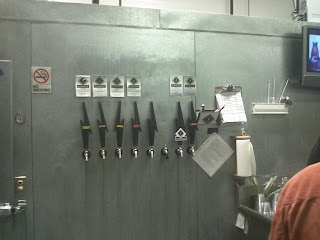 And tap handles drilled into the wall of a refrigerator on the other side.

As indicated by medals earned in the world competition this past week, their humble settings are not an indication of the quality of their brews.

Most all of the San Diego breweries have banned together to form a guild to help increase the visibility of these hidden gems. Since most of them are tucked away in industrial business parks, they are difficult to just stumble upon. The guild put out a flier, complete with a map, and Sean and I have been doing a little tour over the past couple of years.

While one warehouse room looks much like the next, and though many of them put out similar styles of beer, each brewery approaches them from a slightly different angle. Most are open only a few hours a week (adding to the "speak-easy" feel), and are restricted to serving 4oz tasters. While I can't afford to drink really good wine anymore, I can spend a couple of hours sampling really good beer, and walk out for under $10 most of the time.

Most have chalkboards similar to this one from Ballast Point 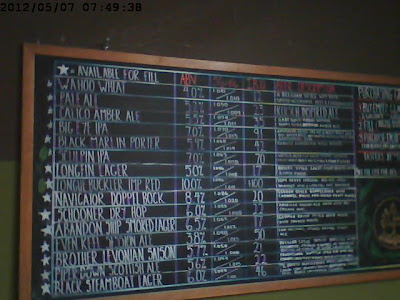 Each beer listed has information not only on style and alcohol content, but also more detailed information on the grains used, their original & finishing gravities, and a a measurement of bitterness called an IBU. You begin to learn that there is a lot more to beer than "Rocky Mountain water", half-time commercials, and bottles that change color when the beer is cold. (Not that there is anything wrong with a nice macro-brew once in a while).

After tasting all of these fine beers, my palate is improving a bit. I won't claim to be a connoisseur, but all the chalkboard information and chats with the brewers have been educational. I have learned that Belgian style beers are not my favorite, that I prefer Pales and IPAs with an IBU at 70 or below, and though I don't care for scotch, Scotch Ales are quite tasty. Of course, nothing can beat a good stout or porter.

In a couple of the breweries, you will see something like this 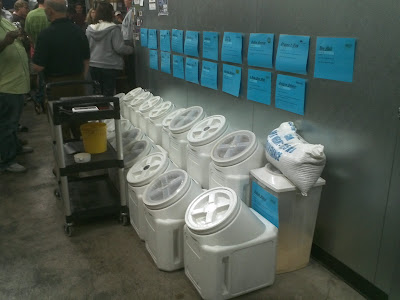 What are these you ask? Why, they are bins filled with grains you can buy to brew your own beer. And that is just what I have started doing...