There is someone new in my life.

Well, she has been in my life for a while now, but the relationship has taken on new meaning recently. Kristy is someone I have known for a few years, but have spent much more time with since the move down to San Diego. I think there was always some attraction between us, but we have only recently taken the leap from friendship to something more.

I think we both held off, not wanting to torpedo the friendship if things didn't work out. We are part of the same, great circle of friends, so as silly as it sounds, it felt like we were risking that as well. I also don't think I was ready for any sort of relationship for a while. But I really feel like I have turned a corner in the past six months and I am excited about this relationship.

Even though we have been friends for a long time, we are still discovering new things about each other. We have been dating for about three months now, and it is going great so far. It feels wonderful to turn that part of my brain back on, and to be more deeply connected to someone I care about.

I don't know how much I will write about the relationship, but since she has appeared here a number of times already over the past year, it seems silly not to say who I am dating. I mostly wanted to share the good things that are going on in my life, and to say that I'm happy to be happy. 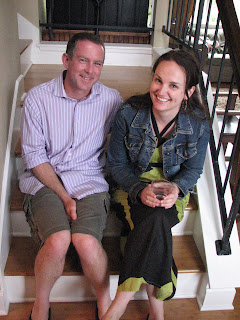 I'm so sorry I missed this post - I should have known there was already someone special after the bathroom mirror post. Yay, yay, yay for you guys!! :)

Thanks! Pretty darn happy. The bathroom mirror heart was a totally random fog image, but of course it had extra meaning when I posted it. :)